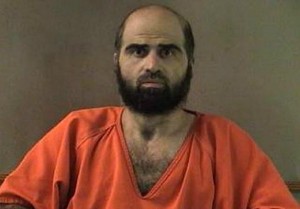 The Court-Martial of Fort Hood Shooter Nidal Hasan (left) is set to start on Tuesday almost four years after the 5 November, 2009 rampage at the Fort Hood Deployment Readiness Center that left 13 people dead and over 30 wounded.  He has been charged with 13 counts of premeditated murder and military prosecutors are seeking the death penalty.  Incredibly, Hasan has decided to represent himself at trial after numerous conflicts with his court provided attorneys.

I have a sneaking suspicion that he chose to be his own lawyer as a sneaky way to sabotage his own defense and try and save his neck when his almost certain conviction goes to appeal.  I would bet he plans on then arguing that his defense was inadequate.  If we are lucky the appeals court will tell him it was his own fault and uphold the death penalty in that case.  Hasan has also been forbidden from using the “defense of others” ploy.  He tried to claim in pretrial motions that he committed the murders to protect the Taliban.  Which claim the trial judge disallowed.

The Court-Martial is expected to last around a month.  I will be watching this closely and I hope everyone else does too.  I also fully expect there to be riots in the Muslim World if he is convicted and sentenced to death.