This will be a series of posts laying out the general history of the major Fronts in World War I.

The First World War was unnecessary in that if the diplomats of Europe had truly wanted to stop the war there was ample opportunity in the five weeks between the assassination of Austrian Archduke Franz Ferdinand and the start of the fighting.[1] The outbreak of war in 1939 can be directly traced to the terms of the Peace dictated at Versailles in 1919, and World War II was incomparably more destructive than World War I both in terms of lives lost and property destroyed. 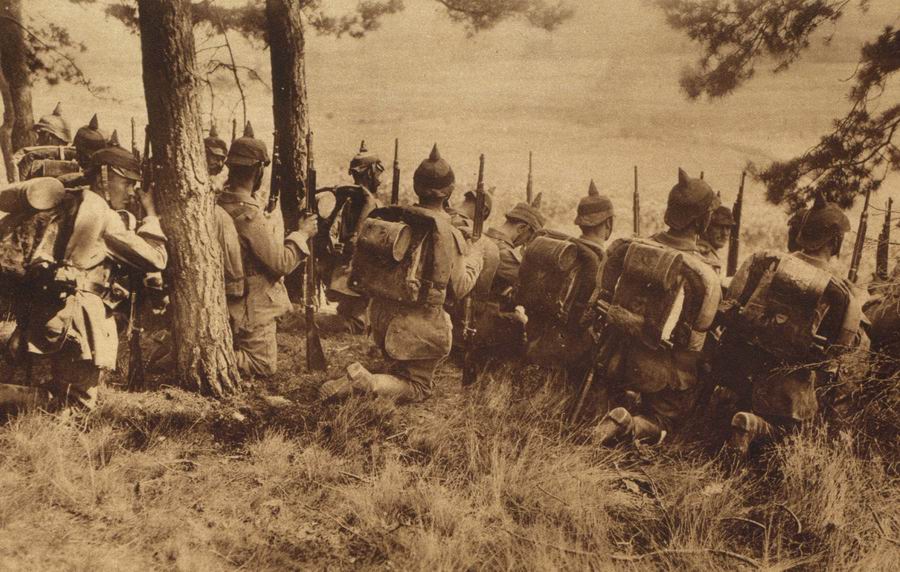 It was fashionable in the aftermath of World War I to speak of a lost generation, meaning the generation of young men who had fought and died in the war.   There is some truth in the talk of a lost generation for the dead in World War I were almost exclusively men of military age in the combatant countries, except perhaps in Belgium none of the combatants lost significant numbers of civilians in the war.   The numbers of men lost to death in each country is staggering especially when one realizes that the majority of the dead were young men who were in the prime of life.

The French war generation suffered grievously during the war and the scale of the death was such that it would skew post-war demographics in France.   The most affected were the conscript classes of 1912-1915, men in their early twenties, which lost between 27% and 30% of their number during the war.   In 1918, there were over 630,000 war widows in France and these women had no good expectation of finding a mate, so many young men had been killed.[2] Germany had comparable casualties to France losing over two million during and after the war from war wounds.   The dead of Russia and Turkey have never been counted with certitude.   Serbia suffered the worst proportionately of all the combatants losing 15% of the national population of five million during the war.[3]

Europe in 1914 had a booming economy and the population of all European countries was on the rise though not all at the same rate.   International trade was flowing freely through the banking hub of London; some economists thought war impossible, because the resulting disruption of trade would quickly bankrupt the combatant countries.[4]

Europe in 1914 was a continent of soldiers, ever since the Napoleonic wars and the massive armies raised during that period, the nations of Europe had felt the necessity to maintain large standing armies with a correspondingly large reserve capability.   The Germans had been most successful, because their population was rising faster than the rest of Europe and they had the most efficient army in Europe.   They had proved this during the German wars of unification in the 1860â€™s and 70â€™s.   France attempted to keep up with Germany but with a population only two-thirds that of Germany they were hard pressed to find expedients that would allow them the same size force as Germany.

In the period between the French defeat of 1871 and the outbreak of war in 1914, both the French and German armies had made plans in case of a renewed war between their two countries.   The German war plan of 1914 has come to be called the Schleiffen Plan after its principal architect Field Marshal Alfred von Schleiffen, Chief of the German Great General Staff from 1891-1904.[5] This plan recognized that a two front war with Russia and France was probably unavoidable; and called for the major effort to be made in the west, in a bid to knock France out of the war before the Russians had time to mobilize.

The plan Schleiffen developed was modified by his successor Helmuth von Moltke (The Younger), nephew of the Military genius who led the Prussian army to victory against both Austria and France in the mid-nineteenth century.   Moltke weakened the assault against France and strengthened the forces in the east in the fear that Schleiffen had left East Prussia too weak to resist an early Russian invasion.

The Austrian general staff had prepared two war plans one for an invasion of Serbia only in which three armies concentrated against that little country while three armies guarded the common Austro-Russian frontier in Galicia this was known as Plan B.   The Austrian general staff had Plan R in the event of a war with Russia and Serbia, this called for a concentration of four armies in Galicia and two armies against Serbia.

The French had developed several plans as their tactical and operational appreciation changed, but the plan they went to war with was known as Plan XVII and called for an immediate French offensive into Alsace and Lorraine with minimal French forces holding the Belgian frontier.   The French discounted the possibility of the Germans violating the neutrality of Belgium.   The French were also counting on the support of Russia, which had promised an immediate offensive into Germany in the event of war.

The British had no formal alliance with either France or Germany in the event of war but starting in 1904, the British had engaged in informal talks with France about mutual defense.[6] The British were concerned about the fate of Belgium, whose existence they had guaranteed since the end of the Napoleonic wars.   There were no concrete British plans in case of war with Germany but there were discussion within the British military of either an invasion of the north German coast or reinforcing the Belgian army, but the plan finally agreed upon was the British Expeditionary Force (BEF) would reinforce the French armies if the Germans invaded.

The assassination of Archduke Franz Ferdinand was the spark for Austrian war with Serbia but Austria had desired to humble Serbia since the end of the Balkan Wars in 1913.   The Austrians felt that the Serbs were fomenting rebellion in the Slavic regions of their Empire.   The final straw was the Serbian rejection of an Austrian ultimatum for the punishment of the Serbian conspirators that expired on July 25 1914.[7] Between the time of the assassination and the delivery of the ultimatum, the Austrians had sought and received assurances from the German Emperor that they had German support in punishing Serbia.   After the Serbian rejection of the Austrian ultimatum, the Austrians declared war on Serbia on the morning of July 28 1914.

The Russians ordered partial mobilization in an effort to deter Austria from attacking Serbia and on July 31 ordered full mobilization, which prompted a German ultimatum to Russia and France to halt mobilization or war would ensue.   On August 2 and 3 respectively, Germany declared war on Russia and France and commenced operations against Belgium in preparation for invasion.   The Austrians declared war on Russia on August 5, Britain and France declared war on Austria in turn on August 12.   Thus, all the major actors were at war with each other by mid August, little did any of them know that the war would last for four years and cost millions of lives before it was over.

The initial campaign of the war in the west until the stalemate of trench warfare was a series of battles fought between August and December of 1914.   This series of battles can be broken down into three stages, the Battle of the Frontiers and Allied retreat, the Battle of the Marne and German retreat, and the Race to the Sea culminating in the First Battles of Ypres.

The Battle of the Frontiers consisted of the French assault into Alsace-Lorraine and their subsequent Repulse while the German army overran Belgium and invaded France.   The French, in accordance with Pan XVII invaded Alsace-Lorraine where they were first repulsed and then counterattacked by the two German armies guarding the common frontier.   The German main effort through Belgium was a spectacular success with the Germans quickly overwhelming the tiny Belgian army and driving them into Antwerp while the German armies continued their march to France.

After their abortive offensive into Alsace-Lorraine, the French began to retreat in an effort to regroup.   The BEF attempted to assist the Belgian army but the majority of the BEF deployed to the French left flank where the long service regulars of the British army surprised the Germans with their marksmanship at the Battle of Mons while fighting a stubborn rearguard action.   The German army deviated from the Schleiffen Plan at this point by failing to envelop Paris, instead changing the planned advances more eastward in an effort to trap the French army north and east of the city.

General Joseph Joffre, the French commander continued the retreat while redeploying his armies to counterattack the Germans.   In early September the French and British counterattacked and almost trapped the German fifth army north of Paris but the Germans retreated and prepared defensive positions along the Aisne river on the Chemin des Dames ridge.

Subsequently from October into December 1914, the combatants fought a series of confused battles in a northwest direction in attempts to outflank each other.   This has become known as the Race to the Sea though the object of these battles was not to reach the coast but instead to get around the exposed flank of the enemy.   In October, the last of these battles was fought around the medieval Flemish town of Ypres in which the final offensives of the year were fought in an attempt to break though and continue a war of maneuver.

The BEF and Belgianâ€™s with some French assistance fought the first of the great trench warfare battles of the western front in a successful attempt halt a German breakthrough.   At the end of the battle, Ypres was virtually destroyed but remained in Allied hands and would do so for the remainder of the war.