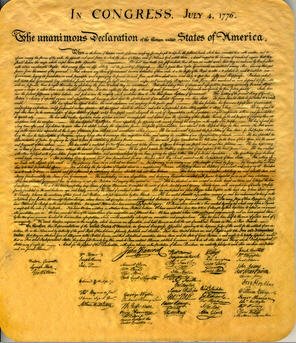 Text of Declaration of Independence

Saw an interesting article today: Back to School, Back to U.S. History Basics from George Nethercutt is probably one of the best arguments I have read for emphasizing historical literacy in schools that I have seen in a long time. I have posted before about the general lack of civics knowledge in America and it is worth saying again and again that civics and history knowledge is essential to the functioning of American democracy.
The argument that if the citizens of a country lack knowledge about the historical roots of their government and nation then they will not long keep either is very true. Is it not easier for tyranny to rule over the ignorant? What I find even more distressing than the general ignorance of civics and governing principles is the disinterest people show in learning it to begin with. this is something that all of us as Americans should be appalled at and working hard to change at both a local and national level. I do not have great hopes though, too many people are blissful in their ignorance and the forces of political correctness and postmodernism are strong in the academy.

Here is a good report from the American Enterprise Institute on the state of Civics Education in America: High Schools, Civics, and Citizenship: What Social Studies Teachers Think and Do

Text of Declaration of Independence