The Battle of Zama, fought in 202 B.C., was the culminating battle of the Second Punic War between Carthage and Rome. The short story of the battle is that a Roman army under Scipio met and destroyed the Carthaginian Army under Hannibal. The defeat forced the Carthaginian Senate to sue for peace and ended the war.

What makes the battle interesting from my perspective is that the Roman army was outnumbered and on the offensive and still won. This is not typically what happens in warfare, especially in warfare in antiquity when numbers made a rather large difference in melee combat. One thing that makes Zama stand out is the sheer number of War Elephants (80 or so) Hannibal had and made use of during the battle, and how ineffective they were. Generally war elephants are depicted in popular literature as being fearsome things akin to modern tanks. All the battles I can think of off the top of my head in which they were used, they tend to be pretty ineffective in actual use. I tend to think they were used more for psychological reasons, to spread terror, than because they had any real tactical effectiveness.

The Carthaginian army numbered about 55,000 while the Romans had about 40,000.   Of decisive importance was that the Romans had numerical superiority in cavalry.   Before the battle began the opposing armies drew up opposite each other on a plain outside the ancient city of Zama, hence the name of the battle. Both armies had three lines of infantry with cavalry on the wings. The Carthaginians had mercenaries in the first line, citizen militia in the second, and Hannibal’s Italian veterans formed his third line. Scipio arrayed his troops according to Roman doctrine with the Hastati, Principes, and Triarii forming the first through third lines respectively with his auxiliary cavalry on his flanks. The below diagram from Wikipedia is a good stylized representation of the deployment of the armies. In addition, Hannibal put his war elephants out front completely hoping to stampede them through the Roman formation and break it up before the main battle was joined. 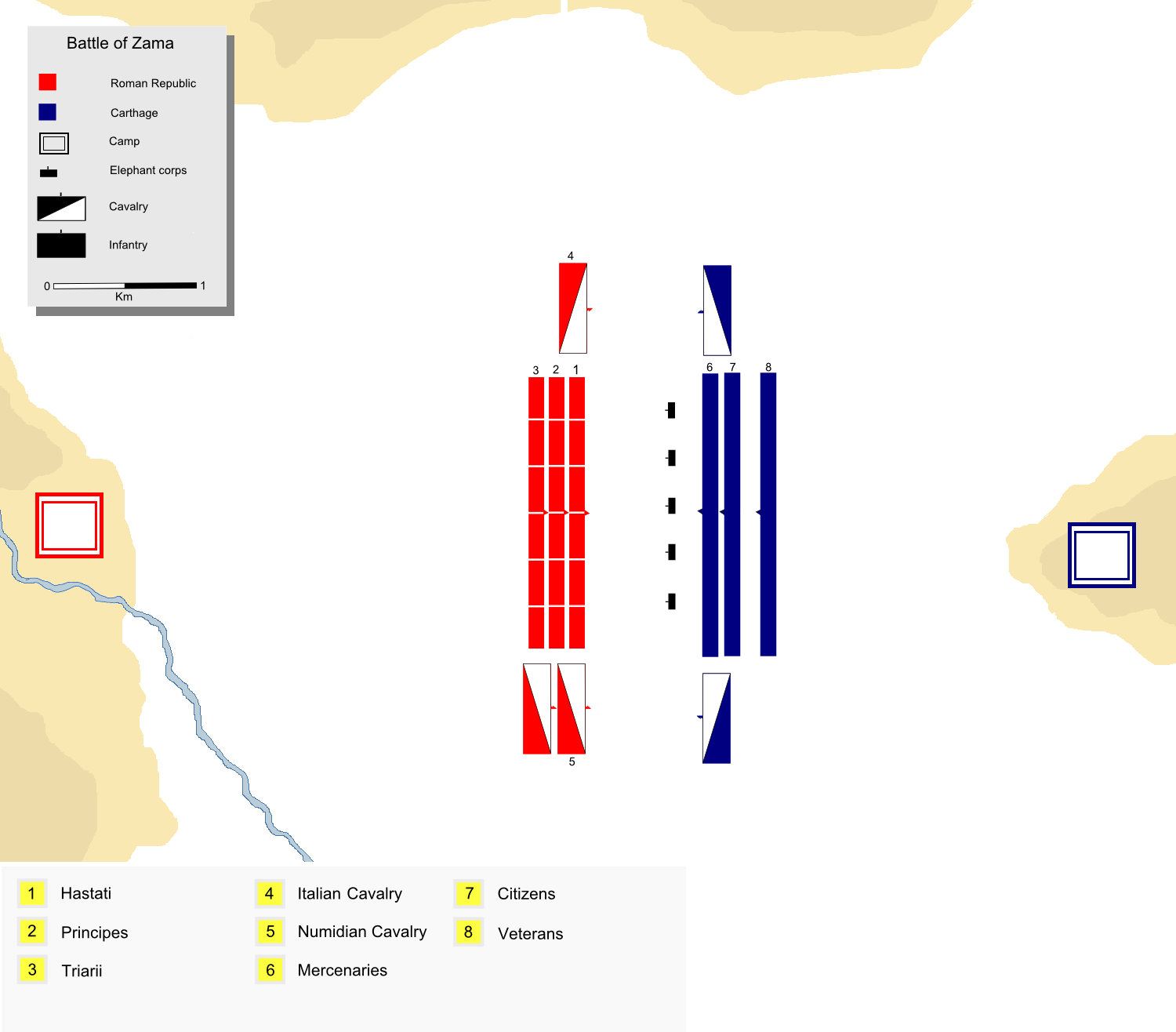 The course of the battle was pretty straightforward. Hannibal attempted to charge is elephants through the Roman ranks, Scipio defeated this maneuver by the simply expedient of opening gaps in his army through which the elephants charged. The disadvantage of elephants is that they were only controllable if they charged in a straight line. After the elephants passed through the Roman army reformed and the Roman cavalry attacked and defeated the Carthaginian Cavalry on the flanks driving them from the field and pursuing them. As the cavalry battle occurred the Roman infantry attacked and defeated the first and second lines of Hannibal’s army but were stopped by the veterans of the Carthaginian third line. The battle remained a virtual stalemate for a few hours until the Roman cavalry returned and attacked the Carthaginians on their flanks. The battle rapidly devolved into a rout and Hannibal was forced to flee the field.

Total casualties on both sides were somewhere in the neighborhood of 40-50,000 with the vast majority of those being Carthaginian.   The casualty ratio was about 100-1 if prisoners are included, and they should be because anyone no longer capable of fighting is essentially a killed whether they are killed, wounded, or captured.   That ratio seems incredible but it is actually not when you consider the nature of ancient melee warfare.   Hanson, goes into this in great detail in The Western Way of War: Infantry Battle in Classical Greece

. He makes the valid and logical point that it was natural that casualty counts would be lopsided as the victors cut down their opponents as they attempted to flee. Man does not naturally act merciful in battle, that comes from discipline and civilization.

From a tactical standpoint there is really nothing to be learned from the battle except that the Carthaginians wasted their money on mercenaries, who are only loyal so long as they feel the risk is worth the pay in the first place and that citizen militias had no business standing in line of battle against an experienced foe.   It was significant that only the Italian veterans in Hannibal’s army managed to hold firm.   It is also significant that even they could not maneuver quickly enough to defend against the flank threat when the Roman cavalry was done treating the Carthaginian cavalry like step-children.   The Carthaginians tended to form up in blocks that were much more close than the Romans which robbed them of some articulation.   Hannibal also probably hoped or expected too much of his war elephants, which were blunt instruments at best and useless when faced with the simple counter that Scipio devised. The major result of the battle was that Carthage was destroyed as a military and forced to sue for peace. In granting that peace the Romans exacted such a price as to ensure that Carthage could not become a military power and rival in the future.