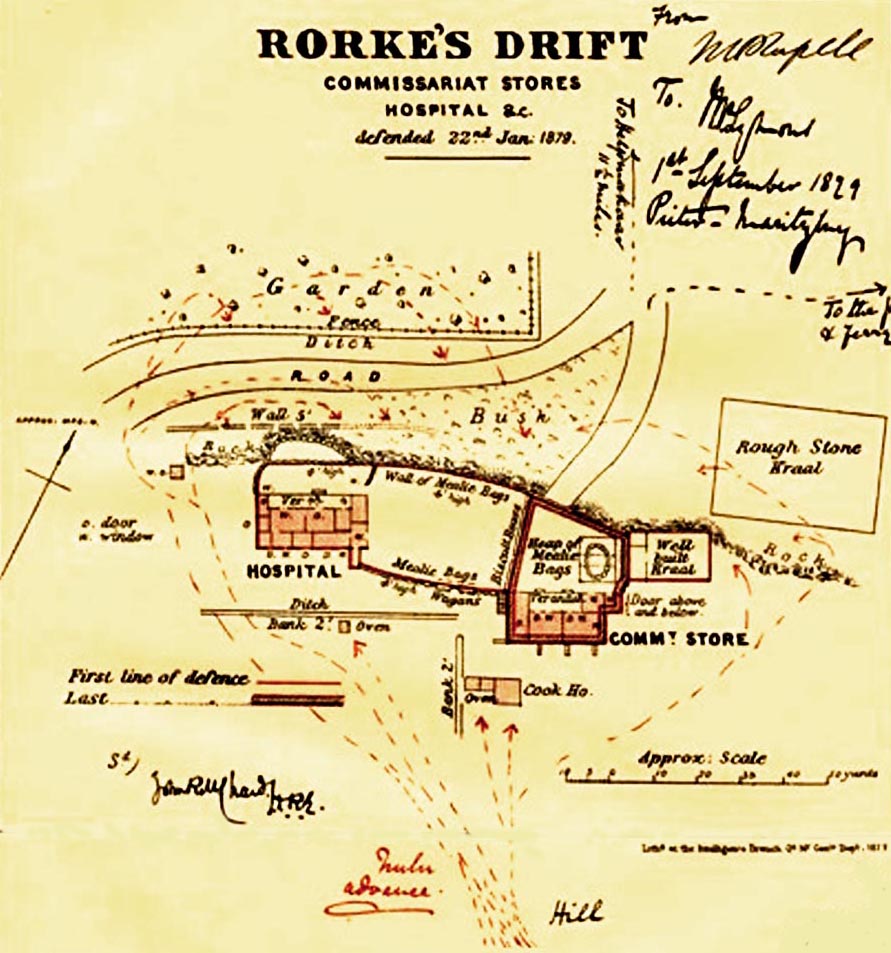 The 1879 Battle of Rorke’s Drift is one of the most celebrated, and smallest battles in British history. It occurred in 18179 during the Zulu War in South Africa at the Mission and Supply Station of Rorke’s Drift. During the battle, some 179 British soldiers held off and defeated a force of over 4,500 Zulu warriors winning a eleven VC’s in the process.

The Battle itself occurred around Rorke’s Drift, a British mission station that had been converted to a logistics base and hospital by the British Army, it is located on the border between Natal Province in the colony of South Africa and Zululand. The battle occurred on the same day as the British defeat at the Battle of Isandlhwana on 22 January, 1879. Isandlhwana is one of the most inexplicanble British defeats, it is difficult to explain how over 1,000 rifle armed soldiers in a good defensive position were defeated by spear armed native warriors while Rorke’s Drift is the opposite. At Rorke’s Drift 139 identically armed soldiers defeated over 4,500 spear armed warriors. On the face of it, the Zulu’s should have been able to overwhelm the small British garrison even at the cost of horrendous casualties from British rifle’s. They the Zulus were defeated says more about the British than it does the Zulu warriors they faced.

The unit defending Rorke’s Drift was B Company of the 2nd Battalion, 24th regiment of Foot.   They had hastily prepared the mission station for defense by erecting barriers of grain sacks called “mealie” bags to form a perimeter around the station’s two stone buildings and encompassing a stone kraal inside the perimeter.   They also knocked out firing ports, or loopholes, in the stone walls of the buildings themselves.

The majority of the Zulu warriors were armed with spears but some had muskets and rifles.   They were poorly trained in the use of the firearms they had though.   The battle started around 1630 when a small column of some 500, Zulus approached the perimeter from the south. At that point the British opened fire at long range but the Zulus pressed their attack. The Zulu continued their attack and the main force eventually came up and began attacking near the hospital.

Around 1800 the Zulu’s finally managed to break into the hospital and began to spear the wounded soldiers there. The British fought back but the relentless pressure of the Zulus continual attacks eventually drove them from the hospital building into the inner courtyard and Kraal that was there. The British continued to withdraw and by 2200 the British had withdrawn to their final perimeter around the storehouse. Zulu attacks continued until approximately 0400 when the final push against the British position was repelled.

As dawn broke the British began to police up the battlefield but quickly maned their positions at 0700 when some Zulu warriors were spotted. These did not attack the outpost but continued away from the battlefield. AT 0800 the British relief force arrived and there were no more attacks or sightings of the enemy.

Of the 139 British defenders 17 had been killed and 10 wounded in the attack. Zulu casualties are estimated at 500 killed and an unknown number of wounded from a force of approximately 4,500.

11 Victoria Crosses were awarded to British soldiers after the battle, they went to: