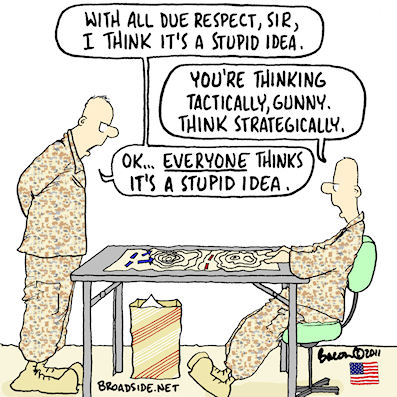 There is a very interesting pair of essays in the Baen free non-fiction compendium for 2011. The essence of these two pieces is the geo-strategic position of the United States in the early 21st Century and what the American prospects for maintaining global dominance are. This piece is not necessarily about geopolitics but it did get me thinking about another idea I have been tossing around in my head for the past few years, and that is tactics. Specifically tactics and the way their use affects the course of battles both classical and contemporary.

Too often, tactical considerations are given short shrift in accounts of battle. For example, it is common to read historians that claim the German Army was tactically superior to most of their opponents throughout WWII, but it is never actually pointed out in what ways they were superior except in very general terms. Generally, tactics are discussed in any meaningful way only when the historian needs to make a point. I think this is a mistake. I wish I could remember who pointed out that battles are actually only the sum total effects of all the individual combats that they comprise. The more I ponder this, the more I realize that it is true. The individual and small unit leaders are more indispensable to success in battle than is generally acknowledged.

Consider that even at the advent of the gunpowder age and throughout the era of muzzle-loading weapons, tactical considerations came into play in battle. It was not just lines of muzzle-loader armed men lining up across from each other and banging away at each other to see which side cold withstand the punishment longer. There was tactical movement on the battlefield as one side tried to take the other in the flank or maneuvered their artillery to concentrate on one segment of the enemy’s line to create a breach.

We should also remember that armies were not homogenous blocs of automatons. There was a reason for the harsh discipline employed in the armies of the day. Desertion before or during battle could and sometimes did play a decisive tactical role. It is hard to maintain your line when it melts away because men are leaving. There was a reason that traditionally the job of the NCO was to force men to stay in line. There is an old military saying that “men should fear their leaders more than the enemy.â€ That saying grew out of practice.

As we advance into more modern times tactics became even more important as the battlefield began to empty. Starting around the time of the Napoleonic wars skirmishing became more important. In fact, skirmishing is the root for todayâ€™s tactics of fire and maneuver employed by ll successful armies today. As skirmishing became more prevalent the importance of small unit tactics and actions became more pronounced. A squad, platoon, company, or battalion maneuvering properly and opening its attack or showing itself in the defense at the right moment could and still can have a decisive effect on a battle. As the art of warfare has progressed the tactical employment of units has assumed ever greater importance as the battlefield has emptied out and battles more and more are comprised of small groups fighting to achieve and integrated objective.

The importance of tactical considerations has concurrently caused an increase in the importance of small unit leaders from squad leaders to battalion commanders. It is they who are the pont f the spear and make the immediate command decisions that affect the outcome of battle in line with what the US Army calls the “Commanderâ€™s Intent,â€ which is articulated in FM 101-5 on page 5-9. Essentially the commanders intent is nothing more than a definition of what mission success consists of. It can be anything, literally anything, such as holding a terrain feature, securing a town or building within a town, to completing a logistics mission successfully.

The Germans developed the method currently used by successful armies that really integrated tactics into operational and strategic planning and made it possible for many small units to work in concert without communication. The method was Auftragstaktik or mission-oriented orders in English. A discussion of Auftragstaktik is a whole other post though.

The point of this post is that it is my belief that tactical considerations in battle, specifically the contributions of tactical doctrine to battlefield success are at best poorly understood by most historians who prefer to see armies as one mass and the actions of generals and senior staffs to be more decisive. I acknowledge that generals and senior staffs have much more influence over the general course of a war than the individual soldier, squad, or company. However, when it comes down to actual fighting, poor doctrine or poorly rained troops can negate the best positioning and staff work in the world.

What do you think?