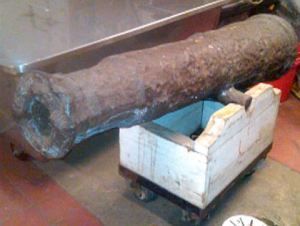 This is a curious item of interest:Â 18th century cannon in NYC found to be loaded with ammo

Recently, a Revolutionary era cannon from a British warshipÂ that had been on display in Central Park Â until the mid-90’s in New York was found to loaded during restoration efforts. Â The cannon was apparentlyÂ loadedÂ with 2 pounds of black powder and a cannonball. Â It was disarmed by the NYPD Bomb Squad after the police were notified. Â The powder is claimed to have still been viable. Â Now wouldn’t that be a hoot if somebody had figured that out while the cannon on was still on display and fired it. Â WouldÂ we considerÂ anybodyÂ injured a Revolutionary War casualtyÂ sinceÂ that is when the cannon was loaded?