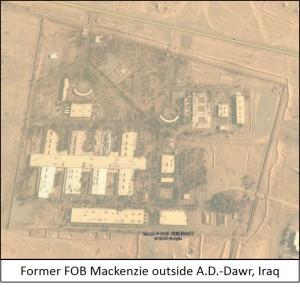 This is kind of an amusing story, unless of course you are the guy that got killed.  When I was deployed to Iraq in 2004 with C Troop 1/4 Cav we had a platoon of National Guard soldiers assigned to my FOB to assist with Force Protection (Guard Duty).  The Guardsmen pulled duty in the towers ringing the perimeter of the FOB.  Along with the Americans, Iraqi National Guardsmen (ING) pulled duty, supposedly it was some sort of trust building thing although I was never certain of the logic behind that decision.  That set up the circumstances whereby the murder could occur.  I was at FOB Wilson, which is about 5 km south of Ad-Dawr, the town where Saddam was captured and about 30 km south of his hometown of Tikrit.  The FOB was on the site of an old Iraqi Army base that apparently did something with radios because we found radios and radio components all over the place when we moved in and took over from the 3ID Artillery battalion that had been there before us.  The town was a dump but that is another story.

In May of 2004 one of the Guardsmen killed the ING guy he was in the tower with.  I was in my billets room in an old Iraqi building at the time the murder occurred between 2300 and midnight and all I heard was a flurry of gunfire from the guard tower closest to our building.  A bunch of guys in the building I quickly threw all our crap on and ran to the sound of gunfire only to find, along with several others, that there was a dead Iraqi on the steps of the tower and a Guardsmen claiming the Iraqi had drawn his 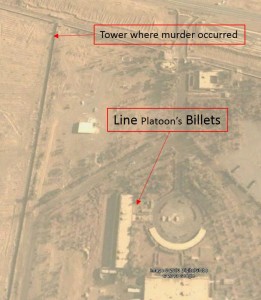 weapon on him.  The guy had emptied his magazine into the Iraqi and hit him several times (something like 22 out of 30 rounds fired hit if I remember the autopsy story right) so the Iraqi was a mess.  The body was policed up, the American was relieved and new people were put into the tower and I did not think much about it until a few days later when CID showed up and even then I did not think much about it.

Several months later, when I was helping to establish an Iraqi basic training center in Tikrit I got the rest of the story.  Apparently the American was facing murder charges because there was more to it than just an Iraqi pulling his weapon on an American.  As the story came out, the American and Iraqi had been pulling Guard together for awhile and lonely being lonely had started having sex with each other.  On the night the murder happened rumor has it that the American had been catching and wanted to pitch but the Iraqi did not want to let him.  Things heated up, the American got angry and the Iraqi grabbed his weapon to stop the American from attacking and raping him whereupon the American shot and killed him.

The Guy’s name was SPC Frederico Merida and he was from the 1/113th FA, 30th Armor Brigade, North Carolina Army National Guard.  He plead guilty and was convicted and sentenced to 25 years in Leavenworth.  Here is a link to some archived stories about the murder.  One wrinkle that I cannot confirm is a story that Merida’s wife did not learn he was being Court-Martialed until she read about it in the local paper.  I heard that from a guy in Merida’s unit.

A special hat tip to my former comrades who were also there from the Veterans of 1-4 Cav Facebook Group who helped me find out the guy’s name and aided my memory of events.  Quarterhorse!: It may not have always been fun but what a ride we had in the Cav.