Medieval politics make modern politics look like child’s play.  If any act from medieval times highlights this it is the Hattin Campaign of 1187 in which the entire military might of the Christian Kingdom of Jerusalem was destroyed because the Christians themselves collectively acted stupidly due to internal political factors in the face of an existential external threat.  The final campaign of the Kingdom of Jerusalem is best seen as an object lesson of what happens when you let internal politics direct external actions.

In 1186 Guy de Lusignan became king of Jerusalem through his wife Sibylla after the death of Baldwin V while in his minority.  The coronation was disputed at the time by Raymond III who had been regent under Baldwin V.  This dispute almost led to civil war and it did lead Raymond to leave the capital with his retinue and return to Tripoli.

In April, 1187 Raymond had negotiated a truce with Saladin to allow transit of Muslims below Galillee.  Balian if Ibelin violated the truce, attacked the Muslim force commanded by Al Afdal, and was defeated at the Battle fo Cresson on 1 May 1187. 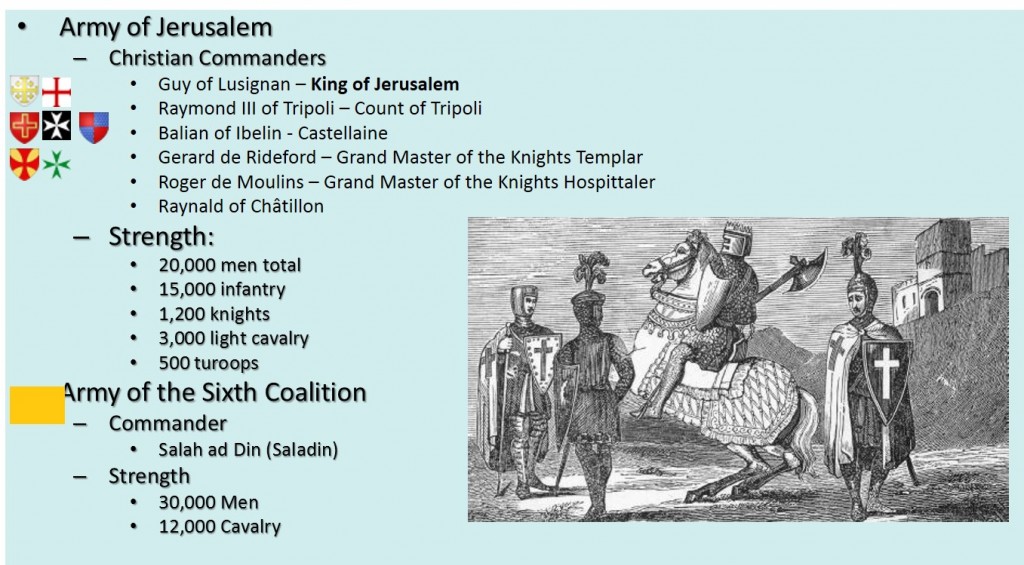 The violation of the truce led Saladin to declare the Kingdom of Jerusalem essentially outlaw and mount an invasion.  Because the prospect of hanging concentrate a man greatly, the Christians of the kingdom put aside their differences and called out the host of the kingdom to try and defeat Saladin and save the kingdom.

The Christian army massed near the springs of Saffuriya. Meanwhile on July 2nd Saladin initiated of siege of Raymond’s castle (near modern Kinneret) at Lake Tiberias (Sea of Galilee).  The castle garrison surrendered the same day after an offer to pay tribute was rejected.  Raymond’s wife remained holed up in the castle citadel. 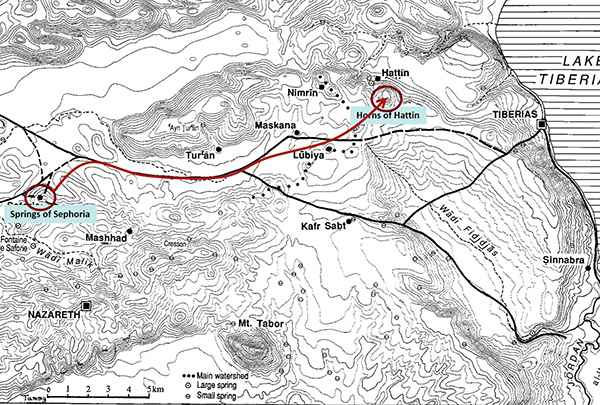 When news arrived of the fall of the castle but that the citadel was still holding out a war council was held.  After much arguing it was agreed that the Christian army would move to lift the siege.

They approached Tiberias on July 3rd.  When they spotted Saladin’s army they moved to defensive positions on the Horns of Hattin, a two summited hill without a spring or water source about 4 kilometers from the castle.

Saladin seized the Springs of Tur’an, the only convenient water source for the Christians.  The single biggest mistake the fractious Christians made was to retreat there in the first place.  Saladin used his army, and especially hi horse archers, to pick off individual Christian soldiers who cam off the hill to find water.  Saladin aggravated the lack of water by setting grass fires that choked the Christian army with smoke and eventually the Christian army moved off of the hill and attempted to break Saladin’s line to get to the lake and water.

After the Battle of Hattin the Christian nobility of the Kingdom of Jerusalem was decimated. The Kingdom would never recover although it would be another 100 years before the last vestiges of the Christian Kingdom were ejected from the Holy Land.

After the disaster at the Horns of Hattin Saladin marched on Jerusalem and laid siege to it.

The crusader kingdom of Jerusalem was rescued by the Third Crusade, which captured Acre on the coast.  This rump state of coastal cities survived for another hundred years until the final Fall of Acre in 1291 to the Mamluk Baibars.