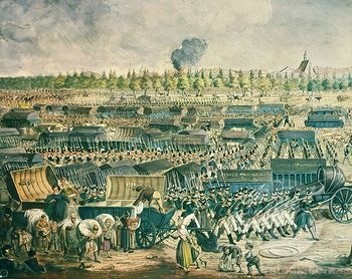 The October, 1813 Battle of the Nations in Leipzig was arguably as important as the 1814 Battle of Waterloo.  In English language historiography of the Napoleonic Wars it is often downplayed or only briefly mentioned however.  This is mainly because no English speaking armies fought in the battle.  The lions share of the fighting at Leipzig was done by Austrian and Russian armies and thus the English speaking world tries to ignore this decisive battle in which almost 50,000 men died.

After Napoleons’ defeat in the Russian Campaign of 1812 and the concurrent French defeat in the Peninsular Campaign the Allied nations of Europe joined together once again in the Sixth Coalition.
Napoleon was not quite defeated though. Between May and August he defeated coalition forces in three separate major battles at Lützen, Bautzen, and in front of Dresden.

Following their spring and summer defeats the Allies then held to their originally agreed upon strategy of avoiding battle with Napoleon himself but accepting battle with his marshals if the situation seemed favorable. The Allies inflicted defeats on the French at Großbeeren, Kulm, Katzbach, and Dennewitz. These defeats led Napoleon to consolidate his army in and around Leipzig in early October, 1813. The Allied armies followed him and converged there and forced a battle in mid-October.

As the allied armies grew closer to Leipzig Napoleon knew he was being encircled but planned to use his interior position to avert defeat and achieve local superiority. This plan eventually failed in the face of the massively superior numbers the Allies could bring to bear.
The allied armies approached from the north, west, and south with the only possible avenue of escape for Napoleon being to the east and away from France.

On the first day, 16 October, 1813, there were several areas of contact between the French and Allies .  Most notably in the areas of Mockern, Wiedentzsch, Lindenau, Connewitz, & Wachau.  The fighting was difficult but the French managed to essentially stay in position and the day ended in a bloody stalemate.

The third day was the culminating day of the battle as Napoleon was essentially encircled.  The fiercest fight of the entire battle was at Probstheida between the Russians and Prussians and French. The French successfully held off the attackers but at the cost of crippling casualties.  There was additional fighting at Paunsdorf and Schonefeld where the Swedes and Prussians attacked and defeated French forces defending these villages. The Saxons and Württembergers defected to the Allies during this action.  At the end of the day the French had held in the south but been pushed back in the north east.  Napoleon knew he was beaten.

During the night of 18-19 October Napoleon began withdrawing his army to the west across the Elster. The Allies were unaware until 0700 on the 19th and Marshal Oudinot put up a fierce rear-guard action in the streets of Leipzig.  The retreat went well until a corporal who inevitably did not get the word blew the only bridge over the Elster up while it was still crowded with French troops and the rear guard was still fighting in Leipzig itself. Blowing the bridge caused a panic a rout of the troops trapped east of the river.  Poniatowski, the only Foreign born Marshal drowned trying to cross the river.

The Battle of Leipizig was the bloodiest battle of the Napoleonic Wars both in terms of total losses and in losses as a percentage of troops engaged.

French Casualties
Not Counting the defection of the Saxon and Württemberg armies the French suffered roughly 80,000 casualties.  44,000 were killed and wounded and a further 36,000 were captured.  19.5% of Napoleons force was killed or wounded while total casualties approached 36% of the army he started the battle with.

In the wake of his defeat Napoleon abandoned Germany altogether and retreated to France to prepare his defenses for the defense of la Patrie that he knew was coming in 1814.  The Allies did not pursue Napoleon after Leipzig as their armies were exhausted after 4 days of brutal fighting and the end of the campaign season was fast approaching.  After Leipzig the Confederation of the Rhine fell apart and French Armies would not occupy German soil again for any appreciable length of time until 1918 when occupation troops entered the Rhineland in the wake of World War I.