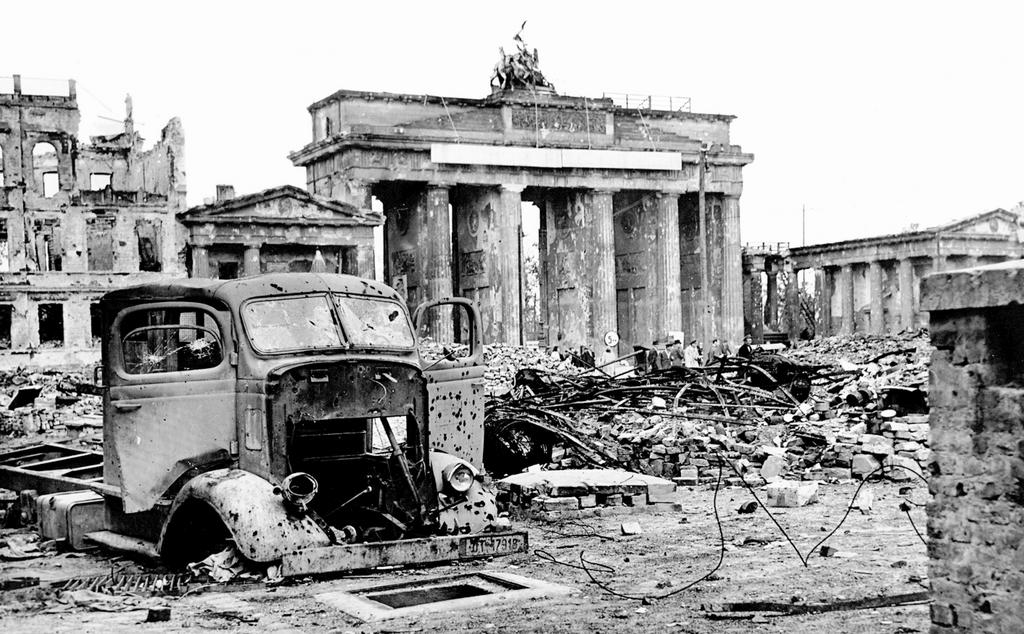 Throughout 1944 the German armies on the Eastern Front had been pushed westward across Poland and into Germany proper.  During the winter of 1944-1945 the front had stabilized roughly along the river Oder and inside historically German territory.  In front of Berlin three Russian Fronts (1st & 2nd Byelorussian plus 21st Ukrainian) faced two greatly understrength German Army Groups (Army Group Vistula & Army Group Center).  A Russian Front and German Army Group are roughly synonymous units within the army structure although at this point in the war German Army Groups were pretty much army groups in name only often being the size of reinforced Corps or even divisions due to combat losses of equipment and personnel with little if any replacements. 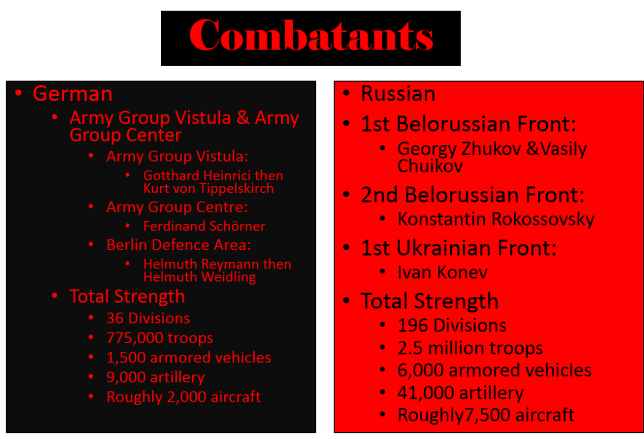 The opening of the battle for Berlin was the breaking of the German positions along the Seelow heights just west of the Oder.  The Seelow Heights are the last tactically significant terrain east of Berlin before reaching the city.  West of the heights the terrain is flat, lightly forested, and dotted with small lakes.  This battle took three days and cost the Russians 20,000 casualties and the Germans 12,000 killed and an unknown number of wounded.  After breaking through the Seelow Heights on 19 April the Russians rapidly advanced to the outskirts of Berlin by 23 April. On 23 April the Russian artillery bombardment of the city began that would not end until the end of resistance in the city on 2 May.  (An interesting fact is that the total tonnage of ordnance fired by the Russians in this time period exceed the tonnage of all allied bombing of the city during the rest of the war.)

The German defenders were the dregs of what was left to Germany from severely depleted Wehrmacht and Waffen SS units to Volksturm, Hitler Youth, and city police.  From 23 April until 2 May these forces fought the Russians street by street and extracted a price from the Russians all out of proportion to their numbers and training.  The street fighting was vicious with the Russians often advancing only because they had managed to kill all the defenders of a particular building or block Tanks and artillery were used liberally to destroy buildings and positions occupied by the German defenders.  The defense gradually contracted until the last center of resistance was in the center of town in the vicinity of the Reich’s Chancellery, Reichstag, and Brandenburg Gate.  Conditions inside the city were horrid for the civilian population with no running water, little food, and gangs of Russian soldiers raping women and children at will when they were not on the fighting line and sometimes even then.

Hitler spent the last months of the war in his Führerbunker underneath the Reich’s Chancellery.  He made his last public appearance on March 20th when he congratulated a group of Hitler Youth who had earned the Iron Cross 2nd Class.  On 30 April, as the Russians closed in on his location he and his Wife Eva Braun committed suicide and their bodies were partially burned in the rubble outside his bunker.  On 1 May Joseph Goebbels poisoned his six children and then he and his wife committed suicide in the garden of the Reich’s Chancellery.  Martin Bormann Nazi Party Secretary attempted to escape the city and for decades was believed to have made it and escaped to Argentina.  However, he died on 2 May near the Berlin Hauptbahnhof and his remains were discovered in 1972 with DNA confirmation in 1998.

On the night of 1-2 May most of the remaining garrison of Berlin attempted to breakout of the city.  On 2 May the Russians captured the heart of the city and raised a Soviet flag above the Reichstag.  Only those troops that headed west managed to breakout and of those only a handful made it to allied lines most being killed or captured by Russian troops west of the city.  Sporadic fighting continued in and around the city until 9 May and the final surrender of all German troops.  The below table contains the commonly accepted casualty numbers for the Battle of Berlin.  I want to caveat by saying that nobody really knows what the true casualty numbers are and they are likely to be higher than the numbers presented on both sides.  The Russians simply kept poor records and used casualty numbers for propaganda purposes while the Germans never even really knew how many troops they had fighting and what paltry records they did keep were largely destroyed in the fighting.  The true number of Hitler Youth, Volksturm, and regular citizens mobilized for the defense of Berlin will never be known nor will the number who chose to die defending their homes.  The sad fact is that the accepted numbers are likely at least 20% too low and it is possible that 50% more people than generally accepted died either in the fighting or while trying to escape the destroyed city and make their way west to Allied lines. 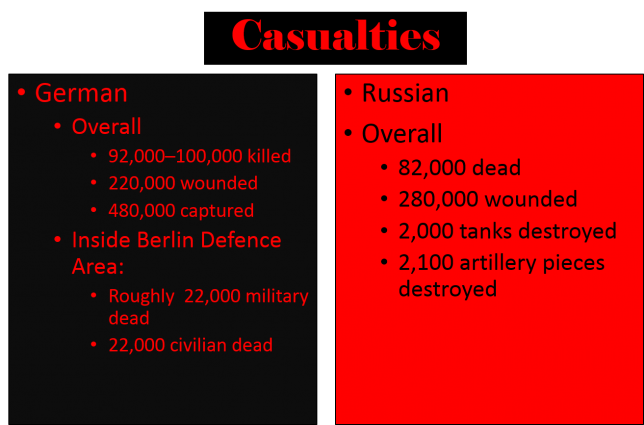 In any event, the Battle for Berlin was the last major battle in the European Theater of WWII and what was left in the aftermath was a wasted and exhausted continent.  What is often forgotten in the triumphant tale of the end of the war in Europe is that most Allied troops fully expected that their war was not over and that they would be shipped across the world to take part in the upcoming invasion of Japan.  That did not happen as the war in the Pacific ended in August after the destruction of two Japanese cities in the first and thus far only use of nuclear weapons in wartime.