Most everybody today has heard some variation on the phrase “Kill them all, let God sort them out’” This phrase gained modern fame during the Vietnam War but it is actually a modern updating of a quote that is over 1,000 years old and was first uttered in Southern France during what are known as the Albigensian Crusades at the Siege of Béziers in July, 1209 by the Papa; Legate and Cistercian monk Arnauld Amalric. The Albigensian Crusades were a series of campaigns waged in France between 1209 and 1226 to stamp out what is known as the Cathar Heresy. 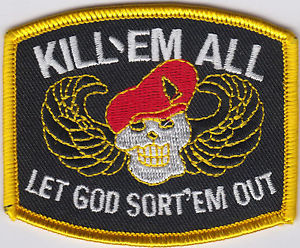 The Cathars were a Gnostic group or sub-faith within the church that rejected some of the orthodox Roman Catholic views of faith in favor of their own views. (The Theopedia a=has a very good discussion of what Gnosticism is at: https://www.theopedia.com/gnosticism) The Cathars specifically rejected baptism and the Eucharist as being false. Like other Gnostics the Cathars believed that there was a distinction between spirit and matter and that matter was inherently evil and thus sinful. They led a different lifestyle than orthodox catholics and rejected much of the materialism in society around them. It was probably this rejection of materialism as much as their beliefs that led to their branding as heretics. The Cathars attempted to hold themselves aloof from society and avoid being soiled by material things. They also had an elect group within their sect called the “perfect” who had forsaken material things in pursuit of pure spiritual life. The movement started to take hold in southern France in the mid-twelfth century and in 1209 Pope Innocent III declared a crusade against the Cathars after the failure of non-violent and diplomatic means to suppress their heresy..

To that end in the spring of 1209 a horde (a charitable term for what was actually a bunch of land hungry locusts) of northern French nobleman descended on southern France determined to root out the heresy and get rich on the land and property of said heretics. The first major town besieged and a center of the heresy was Béziers, which the crusaders laid siege to in July. As the crusaders were setting camp the defenders sent out a sortie that was quickly routed and some of the attackers got into the town whole pursuing the retreating sortie and broke the defenses before the siege had even really gotten under way. What followed was an almost textbook example of the sack of a town as the attackers spread out through the city killing everyone and pillaging the houses.

According to the legend, after the crusaders got into the town of Béziers virtually the entire population took sanctuary in the church. The crusaders knew that not all the people inside were heretics and turned to the papal legate to ask how they could tell a heretic from a believer whereupon the Legate is supposed to have said “Caedite eos. Novit enim Dominus qui sunt eius” which roughly translates to “Kill them all, for God will surely know his own”. The phrase is roughly taken from the bible, the new testament 2nd Letter of Paul to Timothy Chapter 2, verse 19 which in the King James Version reads “Nevertheless the foundation of God standeth sure, having this seal, The Lord knoweth them that are his. And, let every one that nameth the name of Christ depart from iniquity.”

This sentiment came to the fore during the nasty counterinsurgency fought in Vietnam between 1961 and 1973 and the phrase demonstrates some of the frustration and anger of the counterinsurgents in the impossible task of attempting to separate insurgents from the general population.