One of the things about the battle that got me the most was the terrain. One thing I immediately noticed about Austrian dispositions for the battle was that they had refused both flanks and oriented their position on the main road from Königgrätz to Gitschin. It was only the successive hammer blows of multiple Prussian attacks that defeated the Austrians and not superior Prussian technology.  Below is a map of Austrian dispositions before the battle; I know it is hard to really make anything out but I am having trouble getting the full 3mb file uploaded, when I do I will post it. 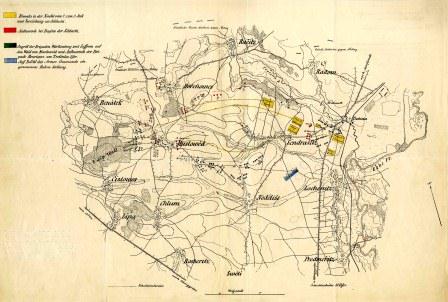 The Austrians actually had a pretty good position for defense.  They were arrayed along a line of hills behind a small river with the fortress city of Königgrätz about 1o miles behind them and Königgrätz itself is situated along the Elbe River which is another obstacle in and of itself.  Add to that that the Austrians had the better artillery and far and away the best terrain on which to site their artillery, which served them well in the battle and the questions about how the Austrians were defeated, becomes even more compelling to me.