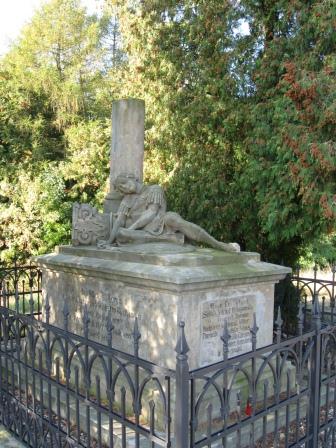 the present.  This episode is about my visit to the Königgrätz Battlefield in the fall of 2009.  I had actually been bugging my wife to make this trip since we moved to Europe in the summer of 2008 and she finally relented in August of 2009 and surprised me by giving me the itinerary for the trip on our wedding anniversary.  I have dragged my wife many battlefields in both America and Europe during our marriage but I was triply impressed because she actually volunteered to go on this one.

We went to Königgrätz the weekend of 26 September, 2009 and it was an adventure the whole way.  We left Friday evening and it was a four hour drive to Hradec Kralovy (the modern name for Königgrätz, but that is a different post altogether).  We got to the hotel we found on the internet after some aimless driving around and worthless Google Maps directions.  The hotel was pretty nice for Eastern Europe, it was certainly better than I expected.  The breakfast was outstanding, the staff spoke excellent English, and the rooms were clean, since we did not plan on doing more than sleeping in the hotel it was more than adequate for what I wanted.  We did get a shock upon check-in though when the receptionist told us that the following day there would be no electricity in the entire town from 0700-1700, but she did not tell us why.

The next day we got up early had breakfast and drove out to the battlefield.  I spent all day walking over the battlefield and attempted to go to the museum located in Chlum which is approximately the center of the Austrian position.  The museum was closed due to renovation though so all we could do was go up to the viewing tower next to the museum.  The view from there is pretty spectacular though and well worth the roughly $1.50 cost to climb it.  I will say that to climb the tower you have to be in pretty decent shape, the tower is about 50m tall and has about 200 steps to the top.  As I said, the view is worth it though:

The view from the Tower overlooking the Königgrätz Battlefield in Chlum

The day was great except we could not get cell phone coverage all day.  When we got back to the hotel around 1700 my wife played with her phone until she finally got a signal only to find out she had over 30 missed calls and about 15 SMS€™s from her sister.  She called her sister to get the news that her father had passed away that morning.  It was at that point that we cut our trip short and checked out of the hotel and drove back to her parent€™s house.

I have continued to study about the battle and we are now planning a return trip to Königgrätz the weekend of my birthday so that I can finish seeing everything.  I also start my final thesis class next week on October 4th so this trip will work out good.  In addition I took a trip to Vienna in the spring of this year where I went to the Austrian Kreigsarchiv and looked over several boxes of Austrian documents detailing the war and Austrian analysis of the battle itself.  It was my first time ever visiting an archive but it was a cool experience and worth another post all by itself.