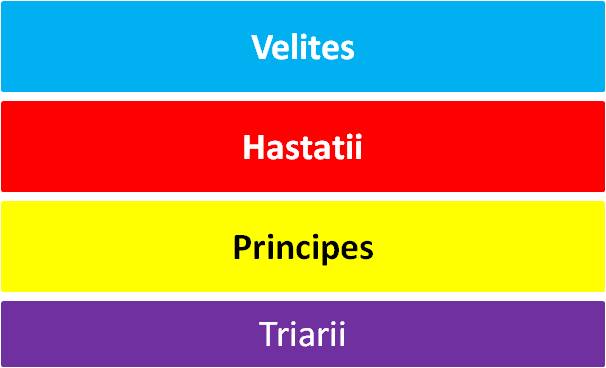 From reading Polybius, I gather that the basic unit of the Roman Army was not the Legion, at least not in the days of the Republic during Polybius’ lifetime. Instead, it was the Consular Army, which consisted of two Legions. A Legion was commanded by a Consul, who was elected by the people and served for a one-year term. The Consuls each appointed twelve Tribunes who served directly under the Consuls.

The Tribunes were distributed six to a Legion. Then began the enrollment process whereby the actual men who would serve in each the Legion were selected by lots from among the tribes and assigned by a rotating order to the four Legions until each Legion had reached an infantry strength of 4,200 men. Three-hundred cavalrymen from among the Equestrian class were then assigned to each Legion by the Censors. This completed enrollment and then the men were told when and where to report to be officially mustered into service.

On the day that the men were mustered they all swore an oath of duty and were then further broken down into the sub units of the Legion and there places within the ranks. There were four places within the ranks of the Legion and these were , velites, hastatii, princeps, and triarii. The velites were selected from the youngest troops and played the role of what we would today call skirmishers; they ranged in front of the phalanx and harassed the enemy prior to the clash of heavy infantry. The hastatii, princeps, and triarii wrere all heavy infantry although they different places within the formation. The hastatii were the youngest heavy infantry, the princeps were the next oldest and the triarii were the oldest and most experienced troops.

The Legion was then subdivided into ten Maniples, the Tribunes selected ten men to command the Maniples and a further ten to act as assistant commander. Each Maniplecommander selected someone to act as adjutant and selected another man to be the standard-bearer for the Maniples. The Maniple commanders were the Centurion that are so famous in popular literature. The cavalry also was divided into ten groups and commanders were chisen in the same way, the difference is that the cavalry officers title was decurion and they only commanded ten men as opposed to the 420 men of the Centurion.

The velites, hastatii, princeps, and triarii were all equipped differently but that is properly the subject of another post. It is also important to remember that the Legion Polybius is describing is the organization as t existed during the Second Punic War; it is not the same organization of the Legion during the Civil Wars or during the imperial period. The Consul Marius Who radically reformed the Legion in the late 2nd Century B.C., it was also reorganized several times during the Imperial Period.

As I get further into the history of the Roman Army, I am sure I will put together a post about the Marian reforms and the effect they had on the fighting methods and power of the Roman Army.