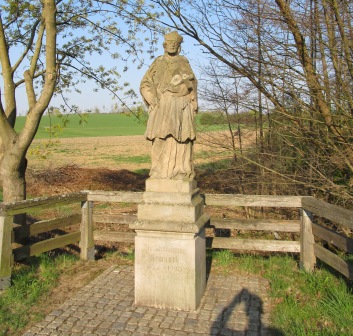 I wrote a post about Saint John of Nepomuk a week or so ago and at the time I wanted to post a picture of the statue near my house but had been too lazy to stop on my way to work and take picture. I fixed that yesterday and here are the photos. The first one is a full-length photo of the statue and the second is a close-up of the inscription. The statue stands on the bridge over one branch of the creek that flows behind my house. The streamâ€™s name is the FlÃ¶tbach (Flute Stream), but of course it is the Shrierbach where it is adjacent to my property line. 🙂 The inscription is kind of hard to make out but it says “Flurbereinigung, Kemnath, 1975-1990” in the original German.   This translates to “Land Reform, Kemnath, 1975-1990″Â Â The statue was placed to commemorate the German Land Reform that occurred between 1975-1990. The statue is obviously much older than 1975, but I asked at the Stadt and nobody could tell me where it originally came from. I am going to try to ask the local Historical society folks when I run into one of them.