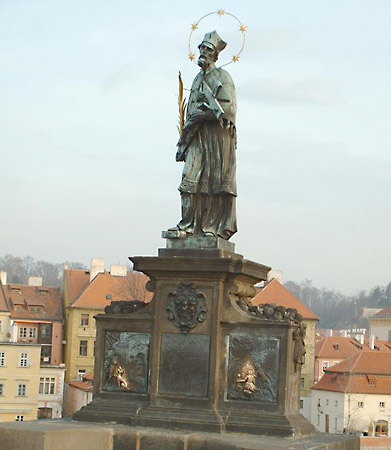 The region of Germany where I live in northeastern Bavaria is locally known as the Oberpfalz or in English the Upper Palatinate. Traditionally, this area was not part of Bavaria but was made up ofÂ numerous small separate sovereignties with a regional identity.   This was a relic of the 1648 Treaty of Westphalia that ended the Thrity-Years War. That all changed in 1805 when Napoleon overran Germany and reduced the 350+ sovereign entities in Germany to 39, this is when the Oberpfalz became part of Bavaria. Of note is that the vast majority of the people in the region are Roman Catholic, my town is 95% Catholic for example. The town where I live is only about tewnty miles from the Czech border.

What brings on this post is that I have noticed in the almost three years I have lived here that just about every old bridge in the area has a statue of Saint John of Nepomuk on it. I started to wonder why and then through the joy of the internet and the local priest found out why.

John of Nepomuk was the Vicar-General of the Archdiocese of Prague in the 14th Century. He was a martyr when he was murdered by being thrown into the Moldau River from the Charles Bridge in Prague at the orders of the Bohemian King, Wenceslaus IV of Bohemia on March 20, 1393. That much is generally agreed on, there are several stories as to why he was killed. The two most prominent are that he was the Queenâ€™s Confessor and refused to tell the queens secrets to the king or that he was killed for confirming the election of a monk as Abbot of Kladrau that the king disapproved of. According the Catholic Encyclopedia he was canonized for being a martyr by not revealing the secrets of the confessional.

Most sources hold him to be the patron saint of Bohemia, what I have discovered in my region is that he is considered the patron saint of water crossings, and bridges in particular. That is why his statue is so commonly found next to bridges and fords. The town I live is only 5,000 people and I can think of at least four of his statues just in town with another three to four in the close vicinity. St John of Nepomuk is the most common religious statue to be seen in the Oberpfalz.

Anyway, I found the story interesting and decided to share it even though it has absolutely nothing to do with military history. I will probably do a detailed post on my local parish church at some point with lots of pictures. It is a very beautiful and old church and not one that would be found on travel brochures though maybe it should be. It rivals many of the famous cathedrals I have been to for solemn beauty for all that it is a simple parish church. I found it funny that when I met my local priest for the first time he pointed out that our parish church was built almost fifty-years before Americaâ€™s discovery.

2 thoughts on “Saint John of Nepomuk”