The First Crusade was arguably the most successful of the various numbered crusades; however, they were not particularly well equipped for a campaign in Asia Minor.   It is no surprise that they were not, as the climate in Anatolia is completely different from Europe.   What is amazing is the way in which the crusaders persevered in spite of the hardships they had to endure throughout the march across Asia Minor. 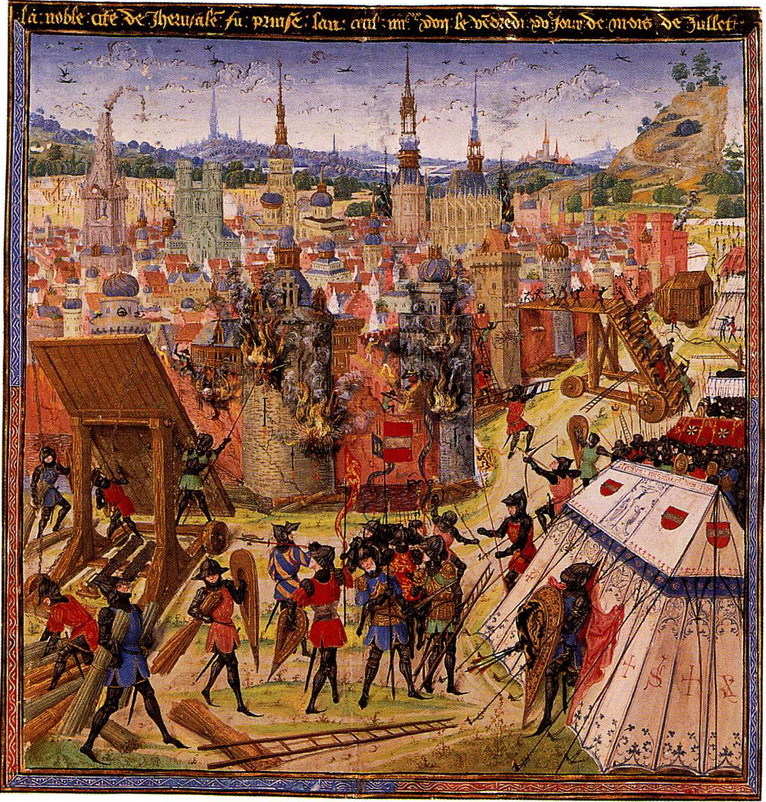 The main crusader army seems to have had an appreciation for the difficulties involved in a march across Anatolia; no doubt; the counsel of the Byzantine emperor, Alexius I Comnenus (1081â€“1118) was helpful in their choice of march route.   Prior to leaving the region of Nicaea to continue the crusade, the leaders held a council at Pelekanum where the Frankish leaders and the Alexius discussed further plans for the crusade.[1] It was decided that the Crusader army would move as a series rather than together so that there would be more flexibility in deployment, and to simplify logistics.

This movement order was proven to be a wise decision just four short das after the continuation of the march when the Turkish Sultan Kilij Arslan (1092-1107) attacked the vanguard at Dorylaeum on 29 June.   The vanguard remained on the defensive until 30 June when the following echelon arrived and set the Turks to flight.[2]

The following months were to prove that the initial assumptions by the crusaders as to the difficulty of their movement were false.   The crusading army had planned to subsist by foraging while crossing Asia Minor, but this plan was soon shown to be flawed.   After the Battle of Dorylaeum, Kilij Arslan adopted a scorched earth policy in Asia Minor.   The Turks laid waste to the countryside along the crusaders line of march.[3] The crusaders suffered horribly during the next four months, many people died form starvation and lack of water, though this was somewhat ameliorated when the army reached Armenian Christian territory in August.

During the move many of the knightsâ€™ horses died, forcing some of the knights to become foot soldiers.   It was not only mounts that died but also pack animal and the crusaders were forced to use different animals as beasts of burden.   The chroniclers make much of the crusaders use of goats, sheep, and even dogs as pack animals and of knights using oxen as mounts.[4]

Once the crusaders arrived at Antioch, there problems were compounded by the fact that they were stationary.   The siege of Antioch while ultimately successful was another example of the poor planning of the crusade.   The crusaders succeeded almost in spite of themselves.

The training and equipment of the crusader army was up to the task of defeating the Turks and Egyptians.   The main reason for this is that the Muslims were not only unfamiliar with the methods of warfare as practiced by the Franks, but the western knights and soldiers wore heavier armor than they did.   The Turks and to a lesser extent other Muslims fought as mounted horse archers and were not equipped for the type of shock combat employed by the crusaders.   The crusaders were trained and equipped for the shock of combat between heavy horsemen and at first could not adequately respond to the harrying tactics of the Turks.

The Turks, whose army was composed almost exclusively of mounted archers, typically attacked in waves.   The first wave would approach and unleash a hail of arrows and retreat while succeeding waves waited behind to come up and do the same.[5] The Franks, on the other hand, relied upon heavy, who would deliver a devastating charge at opportune moments.[6]

Christian knights proved themselves fearless in battle, and when they maintained discipline, they nearly always prevailed.   The danger for the crusaders lay in a breakdown of discipline because of the quarrels among the leadership.   This was to prove almost disastrous at the siege of Antioch.   Time and again, the crusade seemed doomed to failure but the crusaders managed to find a compromise every time.

While the crusaders fooled themselves into thinking they were prepared for crossing Anatolia, they were not.   The crusaders suffered horrifically while enroute to the holy land and it was only religious zeal and their singleness of purpose that kept them moving forward when times were hard.   The story of the First Crusade is one of un-preparedness and success despite the odds.