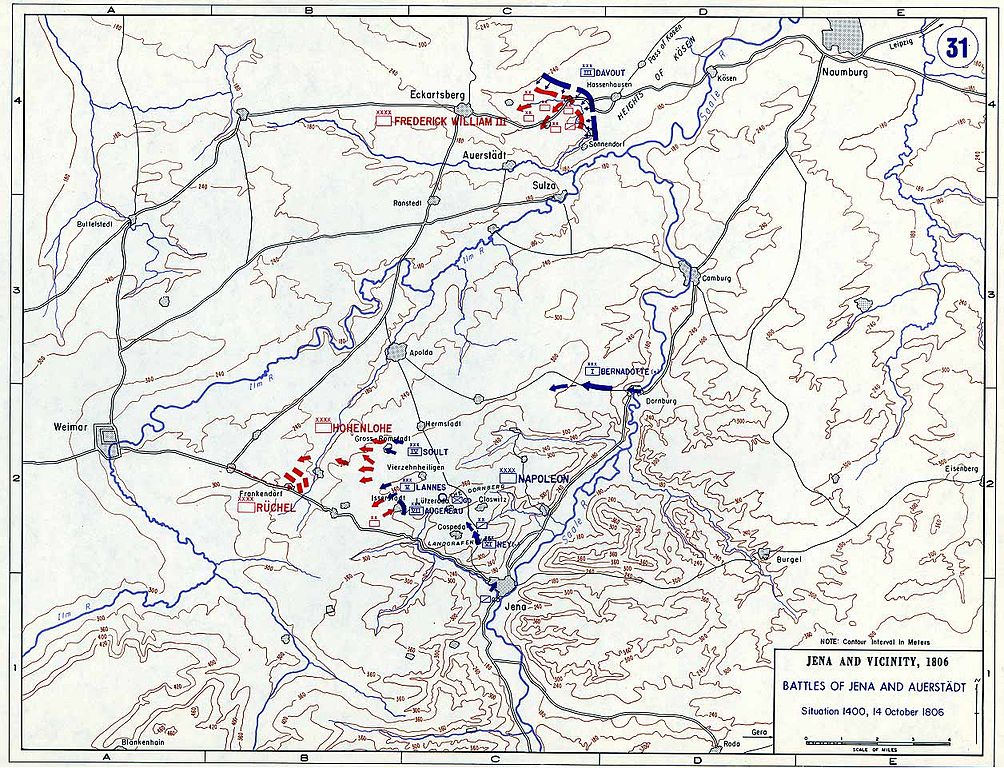 The Battle of Jena-Auerstädt was fought in Germany on 1806 between the French Imperial Army and the Prussian Royal Army. It is actually two separate battles separated by about twenty miles. Both the French and Prussian armies were split leading to two separate engagements one was fought by Napoleon and Davout commanded the French Corps at Auerstädt. The battle at Jena was the larger of the two as far as forces involved are concerned but the action at Auerstädt was operationally the more decisive. Combined, the Prussians suffered a devastating defeat that they could not recover from and led to the virtual surrender of the kingdom in the face of Napoleons demands at Tilsit a little over three months later. It is simpler to look at the two engagements separately and then talk about the way the twin defeats affected the Prussians and French. One of the important things about the battle is the impetus to reform given to the Prussians after their defeat. They went to war against Napoleon in 1805 with an army that was essentially unchanged in structure and doctrine from the one Frederick II had used fifty years previously during the invasion of Silesia and Seven Years War.

I will discuss the Battle at Jena to begin with. Not only were there more forces engaged there, that was where Napoleon was in command. Some sources claim Napoleon displayed his typical brilliance at Jena, I am not so sure. The fighting at Jena began early in the morning and continued through the afternoon. The Prussians pressed attacks home but they were continually thrown back by French artillery fire. The Prussians also suffered from the effect of the fire from French skirmishers.1 The decisive moment at Jena was when several commanders of the Prussian left were killed or wounded. This led to the collapse of that flank and after that it was all over except for the crying as the saying goes. The French pressed their advantage and this led to a Prussian retreat all along their front that quickly started to look like a rout, especially once the French cavalry started attacking and pursuing the retreating Prussians.

The battle at Auerstädt some 12 Kilometers north of the main battle at Jena was a slightly different affair but the results in the end were the same. At Auerstädt, the Prussians actually had numerical superiority and could have perhaps avoided complete defeat if their senior commanders had actually worked together instead of at cross purposes. Marshall Davout commanded the French forces and he handled his troops extremely well. He was also assisted by the overall greater unity of command in the French army. Davout achieved a defensive victory and then followed it up with an offensive late in the day that caused the Prussian army to essentially rout and leave the field in a rush.

The Prussian army was pretty much destroyed as a fighting force after Jena-Auerstädt. The French literally had their way with Prussia over the next two months as the remnants of the Prussian army fought several small delaying actions as the bulk of the army attempted to escape to the east and safety in Russia along with the Prussian king. That destruction, wand the consequent elimination of Prussia from the Second Coalition was the greatest effect of the battle. The long-term consequence was that Prussia significantly reformed their army and was in a position less than seven years later to be instrumental in the final coalition to defeat napoleon both in the 1813 campaign and again at Waterloo at the end of the Hundred Days.

A good resource with driving guides if you happen to visit the battlefield can be found at www.Napoleon.org

One of these days, I am going to actually take the time to drive the hour and a half from my house to the battlefield and do an in-depth analysis with photos. Nevertheless, like everything else, I am hampered by time. When I do, I will be sure to post an update to the relatively broad, operational/strategic analysis presented here. My real love is the tactical side of military history anyway.