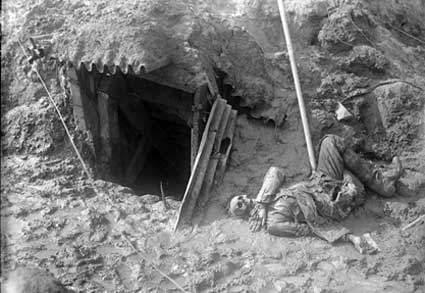 Today I was reading a selection of articles from Foreign Affairs magazine dealing with modern Counterinsurgency and its perceived success or failure.   One of the things that struck me about the articles and that Bing West brings out in his rebuttal to two critiques of a piece he wrote is the modern predilection for forgetting, either purposefully or not, that war is in essence about man killing man.   What should be the enduring image of war is that of a battlefield strewn with bodies after the armies have moved on such as those below.

That is not the image that the modern West has of warfare though.   Instead we get the sanitized version from hollywood where death is remarkably bloodless and the bodies don’t inconveniently hang around.   There are exceptions to this meme such as Saving Private Ryan, or the two WWII miniseries Band of Brothers and The Pacific.   They are just that though, exceptions.

In thew context of counterinsurgency the failure of the Western public to acknowledge the reality of violent death in battle and the possibility that there own sons are actually there to kill and sometimes even be killedÂ  is immoral.   This failure of vision almost ensures failure of the mission.   it also demeans the soldiers that are in the war zone making the sacrifices.   As long as they constrained by silly Rules of Engagement (ROE) that hinder rather than help their mission they are on a fools errand.   As an example, I distinctly remember planning how to use artillery to interdict the shelling of my unit’s FOB in Iraq n 2004 and coming to the reluctant conclusion that we could not.   We could not because of an insistence in the ROE that indirect fire could not be used within 1,000 meters of a structure.

Structure was so liberally defined that it precluded our use of pre-registered fires on likely firing points.   Instead it forced us to react by sending out patrols only after we were fired on and inviting ambush as we moved to the plotted fire point of origin.   This policy was said to be in place to avoid civilian casualties, it undoubtedly achieved that, it also meant that the insurgents suffered fewer casualties as well.   It is also a reflection of the leadership and public’s notion that war should not entail death.   A notion at variance with the reality of the solder’s craft.

The discussion of war and violent death and the assertion that the two go hand in hand is not to advocate wanton violence.   Wanton violence is criminality.   Warfare is violence directed with a purpose, the purpose towards which military violence is directed is the achievement of victory.   Needless civilian casualties are to be avoided as they make maintenance of the post-war peace harder to achieve unless genocidal violence is to be used.   Genocidal violence is and should be a strategy of last resort, but it is a strategy nonetheless.

This post is not to advocate senseless violence and killing in wartime.   It is mainly to point out that the craft and purpose of a soldier is to find and kill his designated enemies.   This task is made harder in an insurgency when the enemy actively tries to blend into the populace.   That does not make the soldiers task of killing any less central though.   Soldiers are singularly poor policemen but that is the role that modern COIN doctrine increasingly forces on them.   That role is an unnatural one for soldiers and leads to senseless stress.   If one reflects on the the nature of an insurgency the oft quoted “we had to destroy the village to save it” about the village of Ben Tre during the Vietnam War starts to make a disturbing kind of sense.

Overall the nature of an insurgency is a fight for frightfulness, who can be more frightful, the insurgent or the counter-insurgent?Â  In Iraq the counter-insurgent ended up being so frightful that insurgents began to defect bringing reduced violence, which allowed reconstruction to occur and the benefits of non-insurgency to become more visible.   The allies have failed to achieve this in Afghanistan.   Partly because the Taliban are masters at frightfulness and the Allies refuse to equal their ferocity and partly because the Allies place to much reliance on an obviously corrupt central government that commands exactly zero loyalty in the hinterland.

Politicians and the public must be made to understand that war is about killing and violence and the proper application of that violence can go further than any number of projects.   If nothing else, all the insurgents will eventually be killed.   The West forgets that war entails death and killing at its own peril. The West should also keep in mind the old notion that it is better to kill them in their backyard than in our own.   Continued squeamishness will eventually see war brought home to the West, the cost of victory then is likely to be much higher than the cost of victory now.

1 thought on “The Reality of War – Violent Death”