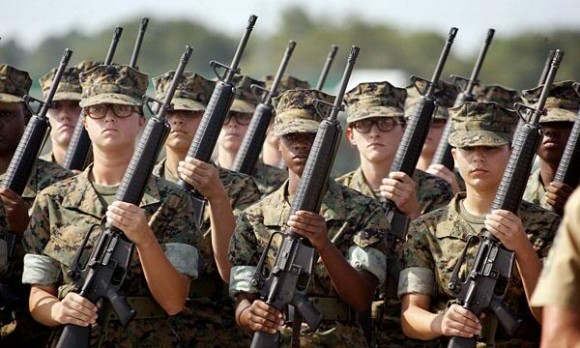 The role of women in combat has been much in theÂ military press and civilian papers recently because of a lawsuit filed by several women who claim the militaryâ€™s ban on women in combat positions is discriminatory.   There are folks who argue that women belong in combatÂ  although those arguments generally boil down to it ainâ€™t fair and it itâ€™s sexists that women cannot be in combat.   The amount of intellectual dishonesty around this debate is amazing and should stun any thinking person.

I will take the above pro-women in combat piece and debunk it as it is full of the kind of drivel that gets tossed around by the post-modern set when this subject comes up.   I take the most umbrage with the first point as the last two are simply liberal tropes that really donâ€™t even merit a response though I will give them a short one.   His points, and he numbered them, are:

1.  They canâ€™t handle the physical strain

This one is easy to refute as it is straight physiology.   I donâ€™t think anyone is arguing that women are not mentally as capable as men.   A simple look at the physical standards that currently exist show up the differences in physical ability between men and women.

This one is easy to refute as it is straight physiology.   I donâ€™t think anyone is arguing that women are not mentally as capable as men.   A simple look at the physical standards that currently exist show up the differences in physical ability between men and women.

A little aside about military fitness standards though.   I will only cite the army minimums here as they are what I am most familiar with and represent the minimum physical abilities the army feels a soldier needs to have based on differing physiology.   I will not debate whether the standards measure true fitness and will concede that they do not measure fitness very well.   As a Master Fitness Trainer for ten years I will say that the Army PT Test is seriously flawed and I am not convinced the new standards and test being considered for roll out this year is any better. They are what we have though and so I will use them.

The Army physical training standards are to be found in FM 7-22 Army Physical Readiness Training.   The requirements to pass the Army PT test are thoughtfully put right on the back side of the scorecard DA Form 705.   The current army PT test consists of three events, all are timed and performance standards are adjusted based on age.   They are 2 minutes of push-ups, two minutes of sit-ups and a timed two mile run.   A minimum score of 60 points on each event is required in order to pass the test.   The requirements for what constitutes a push-up or sit-up are pretty detailed and the run course must be generally flat with a slope not to exceed three percent.The relevant standards (minimum and maximum) for 17-21 year olds are below and here is the formÂ DA 705-2Â :

Can anyone really argue that women are as physically capable as men? I think not, and I further think that everyoneâ€™s personal experience bears out the fact that women are in general not as strong as men.   Sure, there are women who are just as strong as most men but they are tiny minority of all women.

One of the sub-arguments made in the current lawsuit is that women are already doing combat tasks as part of Female Engagements TeamsÂ  (FET).   This is bullshit, as anyone who knows anything about what a FET does can tell you.   FETs do not engage in traditional infantry combat, they accompany infantry squads to help the all-male infantry avoid offending the cultural sensibilities of local cultures.   FETs are not engaged in kicking down doors and taking hills, they are helping search women and talking to local female tribal members.   Female MPs are not kicking down doors either, they are doing traditional MP tasks, which do not include ground combat except peripherally.

During my time in the army I was a Cavalry Scout and spent most of my career on M3 Bradleyâ€™s.   I challenge anyone to find a female who can do the same thing.   Typical tasks include moving 70 lb ammo cans in cramped quarters, pulling the 90 lb gun for maintenance, and doing just about anything maintenance wise on the vehicle from throwing around 100lb track sections to replacing 100+ lb road wheels.   The tasks on a tank and the parts on a tank are even heavier.   When deployed my OTV weighed roughly 60-70 lbs depending on the particular equipment mix I chose for the assigned mission.   I question whether any but the most fit female could do the same things.

Another issue is hygiene, and females have more stringent hygiene requirements than males do to ensure their health.   I donâ€™t know for certain but am pretty sure that a female could not live for a week or two out of her vehicle without a shower without experiencing hygiene related health issues.   When I deployed to Bosnia in January 1996 my entire platoon did not get the chance to take a real shower for 7 weeks when we finally took the opportunity to go to Tuzla and use the facilities there.   Furthermore, we lived in our vehicles until May when our tent camp was finally constructed.

I simply think that females are physically incapable of performing most combat tasks of the combat arms soldier.   If, as rumor suggest, gender-neutral standards are being developed, I wonder what the price in reduced combat capability we will suffer in direct groundÂ combatÂ units.

Bullshit, this is typical feminist/liberal/post-modern garbage they spout to try and shame the segment of society unable or unwilling to engage in critical thought.   More need not be said.

3. Women donâ€™t really want to be in combat, really:

This may or may not be true.   To my knowledge no comprehensive study has been done on this issue.   I suspect that it is a true assertion but absent a real study or poll I hesitate to approve or condemn it.

The push to allow women into combat units has less to do with combat ability, the currency of war, than an effort to once again inflict some social engineering goal on our military.   I have confidence that the military will adapt as we always have, I just worry what the combat and death toll consequences of such a development will be when we have to fight a conventional opponent and are not just chasing insurgents around in the mountains or deserts. Â Women may be able to handle the physical stresses of continuous combat. Â I doubt it, and do not want to see, our soldiers, male or female, pay the price for the imposition of the post-modern agenda on our military. Â The argument may also be that other countries are doing it. Â Every time I hear that I hear my mother in the back of head asking me “if all my friends stuckÂ theirÂ head in an oven would I do it too.” Â Because somebody else is being stupid is not a very good justification for me doing the same.

I would love to hear any comments in agreement or disagreement from my readers.

5 thoughts on “Women in Combat”