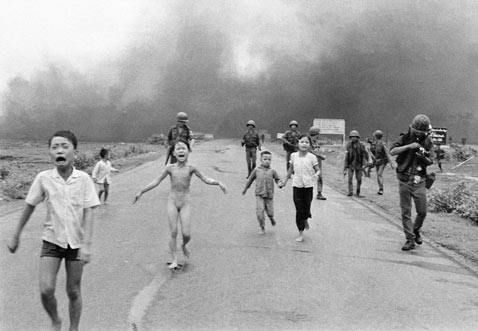 This post is a direct result of my frustration with the garbage spouted by history teachers in the modernÂ educationÂ system. Â The subject is a photo taken during the Vietnam War and the lies that have grown up around the events leading to the picture.  The Photo is named “The Terror of Warâ€ and it won the Pulitzer Prize in 1973 in the Spot News Photography category.

Along with the 1968 photo “Saigon Execution” (another postÂ theirÂ as well), this is one of the most iconic images to come out of the Vietnam War. Â What started this is when my sonÂ cameÂ home from school and asked me about the photo. Â He wasÂ toldÂ by his historyÂ teacherÂ that the Americans bombed the village and that the girl in the photo subsequently died. Â Naturally, I lost it. Â First, I was floored that such garbage was being taught, especially since the facts surrounding the picture are so well known. Â I told him his teacher was wrong and told him the facts. Â He then asked his teacher about it after class one day whereupon she told him that I was lying and she had seen an interview with the American pilot who dropped the bombs. Â SheÂ is no doubt referring to John Plummer, who asserted in a 1996 Canadian documentary that he ordered the bombing, a story later proved to be false.

Video of the airstrike on Trang Bang taken in 1972, the aircraft are clearly identifiable as Douglas A-1 Skyraiders, andÂ aircraftÂ only flown by the RVNAF in 1972.

The short version of the picture is this. The photo was taken on June 8, 1973 by Huynh Cong “Nickâ€ Ut an Associated Press photographer after the village of Trang Bang was accidentally napalmed by A-1 Skyraiders from the 518th Fighter Squadron of the Vietnamese Air Force (VNAF). The girl in the picture is named Phan Thi Kim Phuc an she was nine years old in the photo. The two boys on the left in the picture are her brothers and the children on the right are her cousins.

The airstrike was ordered by the commander of the 25th Division from the ARVN and carried out by aircraft of the RVNAF 518th Fighter Squadron. At no point in the loop between requesting, authorizing, or executing the airstrikes were any Americans involved. It was a completely Vietnamese show. Even more back story is that the village of Trang Bang was under attack by North Vietnamese forces and that is why the 25th division was there in the first place. The airstrike hit the wrong target which resulted in injuries and death to civilians. Not to be flip, but these kinds of things happen in war. War is only clean in video games.

Kim Phuc survived the war and defected to Canada in 1992 where she currently lives in Toronto, Ontario, Canada with her husband and two sons. Â She also established the Kim Foundation, a charity dedicate to helping the child victims of war. Â Ironically enough, the website for her charity repeats the lie that an AmericanÂ adviserÂ was responsible for calling in the airstrike.

4 thoughts on “Truth in Education and the Vietnam War”