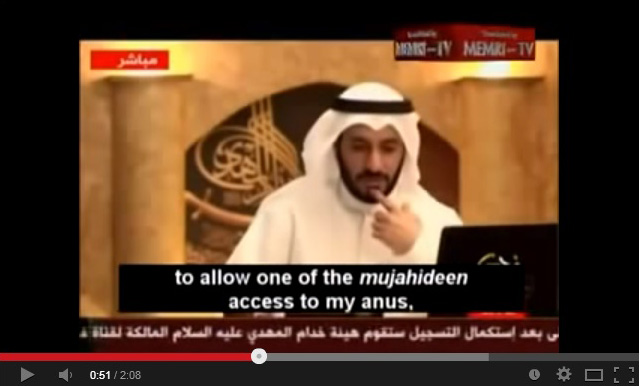 The truth is really stranger than fiction.  I first heard about this one in a National Review opinion piece then I had to actually watch it.  Apparently, a Muslim cleric has made the claim that repeated sodomy is a requirement for Jihadis who want to commit a suicide bombing with explosives in their colon.  Apparently, that is the only way to ensure the colon is stretched wide enough to comfortably accept the explosives.  This is too funny for words.  If that is not the craziest explanation for sodomy I don’t know what is.

Video below; I love the way the announcer pauses at 51 seconds when he gets to the part where the OP asks if it is not only OK but virtuous to engage in serial buggery if you do it in the cause of Jihad.  The wording of the question is classic, “My question is whether I am permitted to allow one of the Mujahideen access to my anus if my intentions are honorable?”:

I spent almost four months training Iraqi troops in Tikrit in 2004 and the other American instructors and I caught trainees buggering each other behind their tents on an almost nightly basis.  This is not an uncommon practice among Arab men as far as I know.  I cannot tell you how many Iraqis I met who told us that “Women are for making babies but men are for pleasure.”  In those words no less.  Now they have religious approval to do what they were going to do anyway.

3 thoughts on “Jihadis must be sodomized – A Fatwa says so”