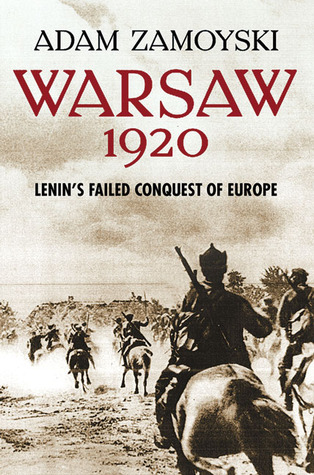 To say that the Polish-Soviet War was a continuation of The Great War would be a lie.

Certainly, the vacuum of power from the Vistula to the Dnieper had something to do with it, but it does not account for behaviors that Americans will always find opaque and odd when visiting Eastern European history.

The Polish side had brandished rifles at one another during the previous international conflict. They were now united for everything reactionary and terrible (in the eyes of the Bolsheviks): defense of their homeland against the international worker’s revolution (led by soft-handed bourgeois intellectuals).

One anachronism would be the idea of a champion swordsman challenging the other side to single-handed combat before the bivouacking belligerents: this seems like something out of The Iliad, but it happened in 1920.

Another anachronism would be the idea of living off the land, leaving nothing but smoke, ashes and corpses in their midst. This was the Russian side: it is even documented that when entering Roman Catholic churches they made it a point to defecate on the alters and pews.

The reason for the Polish victory had little to do with any kind of inspirational or military genius from that of Piłsudski.  Victory lied in the fact that Polish morale was higher due to the motivation of defense of their homes and the reinstatement of their nation, compared to an abstract idea of spreading a worker’s revolution from Japan to the pillars of Hercules.

The other reason, and I may take flack for saying this, was the absolute superiority of the Polish cipher-breaking team, who broke and read Moscow’s encrypted communications and knew exactly what their enemy was thinking.

The Russians had over 5,000,000 men at their disposal, and world victory seemed a certainty. The Polish side did not have reserves, and had a desertion rate that rivaled the Russians.  Polish victory had much to due with the morale of the officer class and breaking the communications, and little to due with superior equipment or organization.

Adam Zamoyski is a direct descendent of the Hetman Jan Zamoyski. Zamość, a city created after his namesake is an amazing town to visit, and if you ever get there, speak with the locals who will show you around and who will be able to tell you where battles occurred during the life of Zamoyski, and in both of the world wars.

The perpetual theme here is the idea of Poland as an irritating roadblock for Russia: the true purpose was to take over Germany, and use it as a launching pad for worldwide communist revolution. Things didn’t go their way this time around.

I could not recommend this book highly enough.