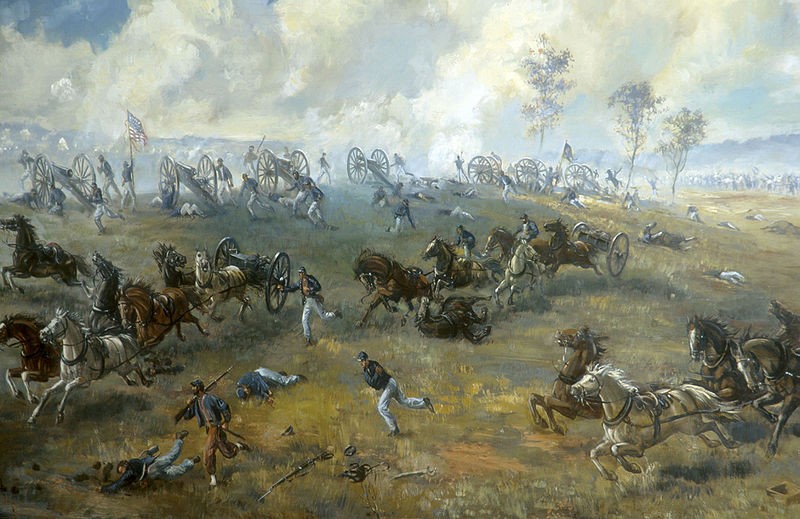 First Manassas or First Bull Run as it was called in the North was the first major battle between land forces of the Civil War.  The outcome of the battle also set the general pattern for battles in the first two years of the war. That pattern being tactical Union defeats with the Confederacy being incapable of following up on the strategic opportunities presented by their victories.

A key point is to remember that uniforms were not standardized on either side this early in the war. Both armies looked like multi-colored mobs and the lack of standardization was to increase confusion about unit identity on the day of the battle.  Another Point to remember is that the Confederate forces were those of two different armies and neither army was completely engaged during the battle. Only about half of the Confederate forces took part in the decisive fight around Henry house Hill.  The commanders of both armies but especially the Confederates comprised almost a who’s who of people that would be prominent later in the war. 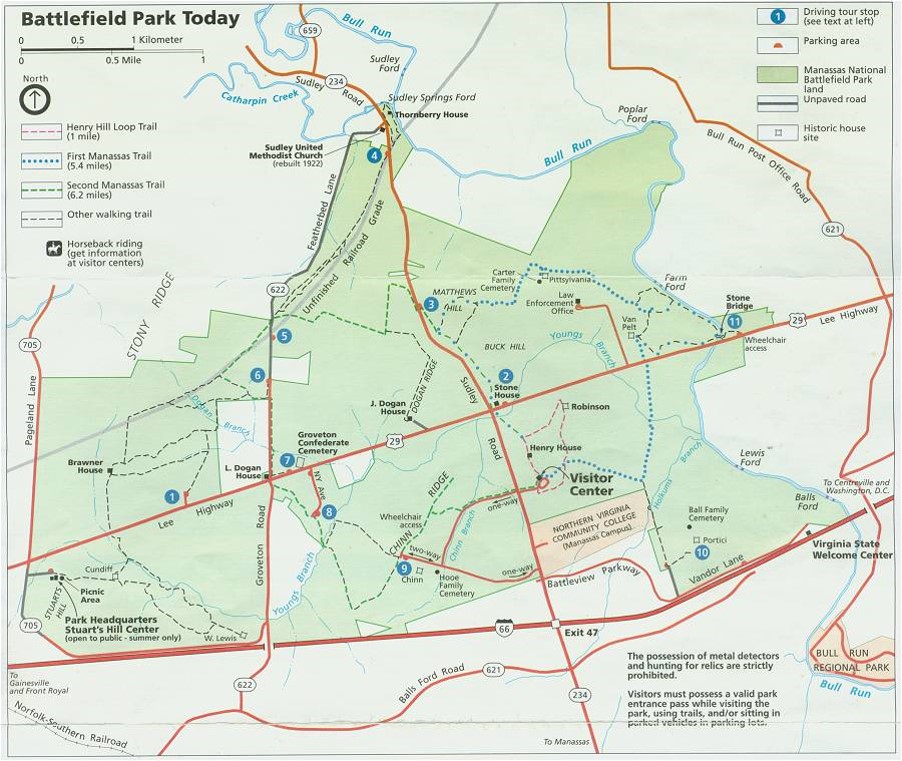 The Opening Skirmish: On July 18th Tyler’s Division of the Union Army tried and failed to force Blackburn’s Ford across Bull Run on the direct route to Manassas Junction.  He was supposed to just demonstrate in that direction while avoiding an engagement.  Instead got into a fight with Longstreet’s Brigade of Confederates that was guarding the ford.  Tyler continued the fight at the Ford until McDowell arrived personally and ordered him to break off the engagement.

The Confederates planned on standing on the defensive just south of the Bull Run River with the approximate center of their line being the stone bridge along the Warrenton Pike where it crosses the river.  By contrast the Union planned a two piece attack with Tyler’s Division demonstrating along the river line while a Two Divisions would march around the Confederate flank, cross Bull Run at the Sudley Springs Ford and attempt to roll up their line from the confederate left.

The morning of the battle itself found the action beginning around 0800 as Tyler’s division demonstrated by the Stone Bridge. About 0900-0915 the Evan’s Brig. on the Confederate left flank began engaging the lead elements of the Union 2nd division as they approached Matthew’s Hill from the west. Evan’s was reinforced by two more brigades but the Union troops arrived too fast forcing the Confederates to engage as they came up and not allowing them concentrate. Around 1100 hours the Confederates were driven from Matthew’s Hill and retreated to Henry House Hill where the first units of Joe Johnston’s Army was arriving and they could establish a defensive line as the Union Army kept approaching.

As the Confederate troops attempted to establish their new position on Henry House Hill vital time was bought by the privately raised Legion of Wade Hampton which delayed the Union troops by about five minutes in a short sharp fight at the foot of the hill.  Incidentally, Hampton’s Legion suffered the highest casualties of any unit engaged at First Manassas. 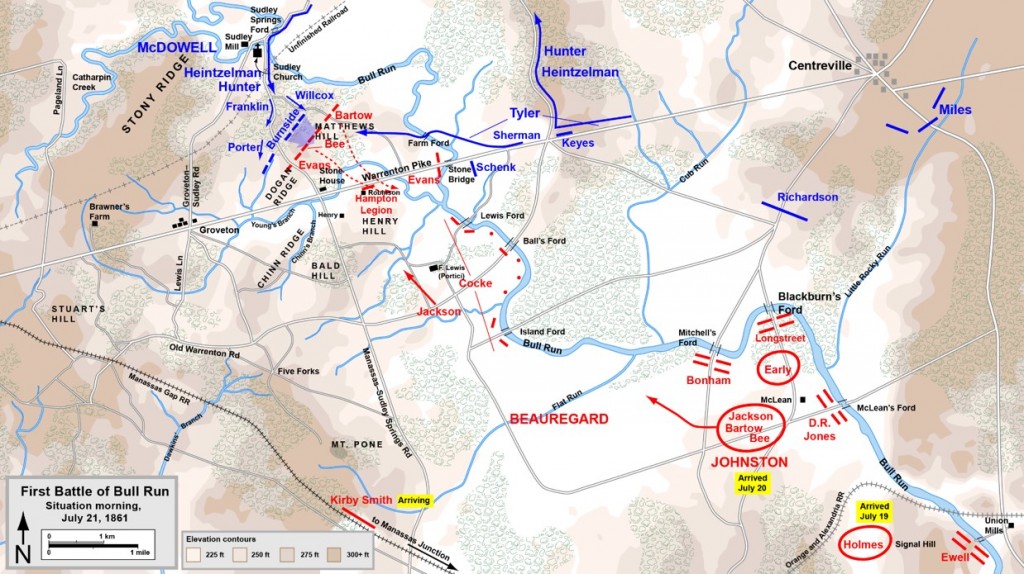 After the Confederates had retreated they established a defensive line in the shape of a an inverted semicircle.  This shape allowed the Confederates to fire on the Union troops from three sides as they came up the hill in the assault.

It was at this time that Stonewall Jackson earned his nickname as his Brigade fought desperately and bought the remainder of the time necessary for the Confederates to consolidate their position.

The key and decisive part of the battle was the fighting that swirled around Henry House Hill in the afternoon from roughly noon until 1600.  The Union army had gotten two batteries of Regular Army artillery in good position to fire on the Confederate lines.

As the fight developed the Union initially had a superiority of force of somewhere between 3 and as much as 5 to 1.  If they had concentrated and attacked with an entire division or even an entire brigade they probably could have taken the hill and won the battle, but they did not d that.  Instead, the Union troops advanced and attacked a regiment at a time.

As each Union regiment assaulted the crest of the hill they were repulsed and thrown back only to be replaced by a fresh regiment to whom the same thing happened.  Throughout the course of the afternoon the Union troops continued to assault in the way until there was a mass of defeated mixed up Union regiments at the foot of the hill.

Keep in mind also that the Confederate troops were continually being reinforced as Johnston’s Shenandah troops were fed into the battle as they arrived from the railhead at Manassas Junction.  Eventually the balance of forces started to swing against the Union.

The battle finally turned entirely against the Union hen the Confederate cavalry of J.E.B. Stuart attack and overran the two batteries of Union artillery that had been so damaging to the Confederates all afternoon. This was doubly worse as the artillery was caught as it was displacing to get a better angle of fire on the defenders.

As the artillery was overrun fresh confederate troops of Jubal Early and Arnold Elzey followed the cavalry and plowed into the Union right collapsing it forcing the entire Union army to begin to retreat.  The Union troops managed to retreat in fairly good order until they reached the Cub Run bridge where a destroyed wagon on the bridge itself caused a traffic jam forced the army to cross the creek on foot.  It was here that rumors of confederate cavalry turned a retreat into a rout and then a rout into a panic.  The only Union unit that maintained discipline was the 14th U.S. Infantry which kept its order and continued to fight serving as a rear guard for the entire union army as they fled the battlefield. 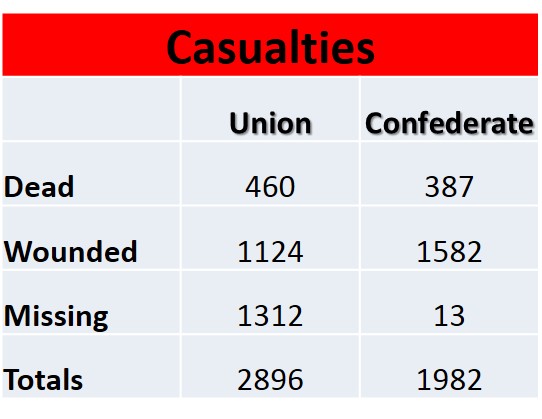 The Confederates were too exhausted to immediately pursue the defeated Union army and by the time they were rested the next day rain overnight had turned the roads into a morass and ruled out any effective pursuit.  This allowed the defeated Union Army of the Potomac to regroup and reconsolidate in and around Washington D.C. in the next few weeks.  The first Union campaign of the war had ended in failure. Casualties were actually fairly light for such a large battle, especially when considered by the casualties standards of later battles of the Civil War.