On this day 2,000 years ago the reign of the first Roman Emperor 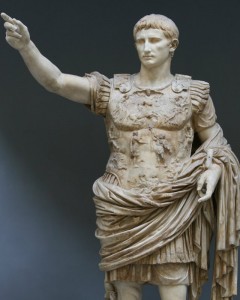 IMPERATOR CAESAR DIVI F AVGVSTVS born Gaius Octavius ended when he passed away at the age of 75 at Nola after a short illness.  Supposedly his last words were – “Have I played the part well? Then applaud as I exit.”  His reign had lasted for 41 years and he had brought true stability and peace to Rome for the first time in almost 100 years.

After his death his body was transported to Rome where he was cremated and his ashes were installed in the Mausoleum he had had built on the Campus Martius for the remains of himself and his family.

1 thought on “Emperor Augustus Passes Away”