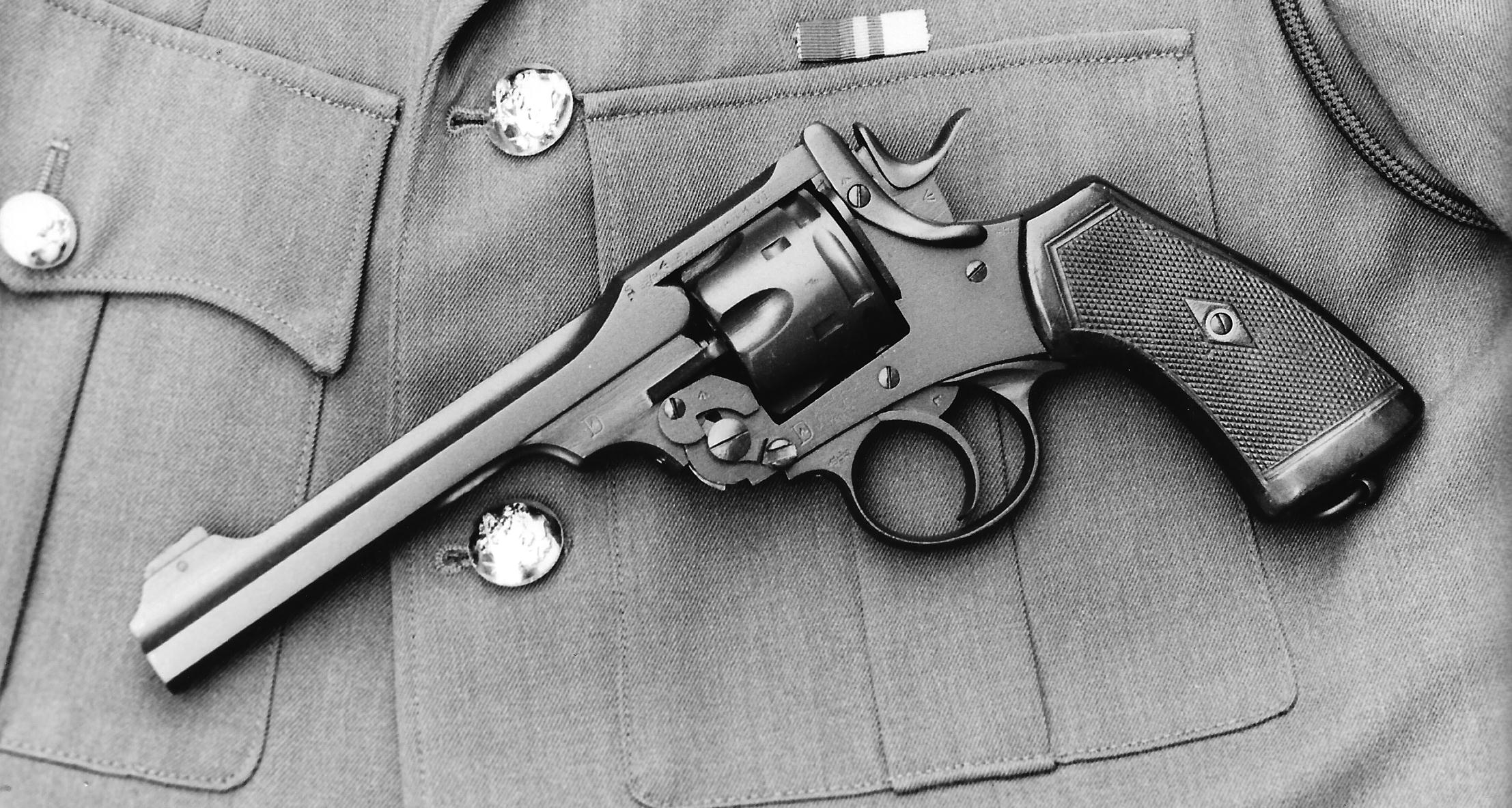 Growing up, my older brother made no bones about his fascination with the second world war. He would regularly purchase Nazi regalia from guns and knives shows, everything from SS medals and historical textbooks to reproductions of Nazi Youth helmets and banners bearing the swastika logo.

At the time, I thought he had an unhealthy obsession with Nazi culture, but later in life, I’d come to find that it wasn’t the Nazis my brother was so taken with. It was, in fact, the entire war itself.

One day, I went to a flea market with my brother and, as we explored a display of antique armor and armaments, I watched in awe as he struck up a conversation with a ninety-something-year old man who’d fought in the war.

My brother was telling this guy everything he knew about the Battle of the Bulge. When he was done, the man turned to me and said, “I can’t believe everything he just said. It’s like he was actually there with me.”

Of all the WWII-related things my brother liked to talk about, none made him light up more than the Lugers. He could drone on endlessly about guns and even if you’d heard it before, you couldn’t help but envy his level of enthusiasm.

Now, I pass that enthusiasm on to you, dear reader.

The following is a comprehensive list (perhaps not as comprehensive as my brother’s would have been, but thorough nonetheless) of the American small arms used in our fight against the fascist regime.

While many firearms were implemented during World War II with no less than ten rifles, five sub-machine guns, seven machine guns, three sniper rifles and seven shotgun models being deployed, these small arms were the most common handguns used by ground troops in our efforts to bring an end to the Third Reich. 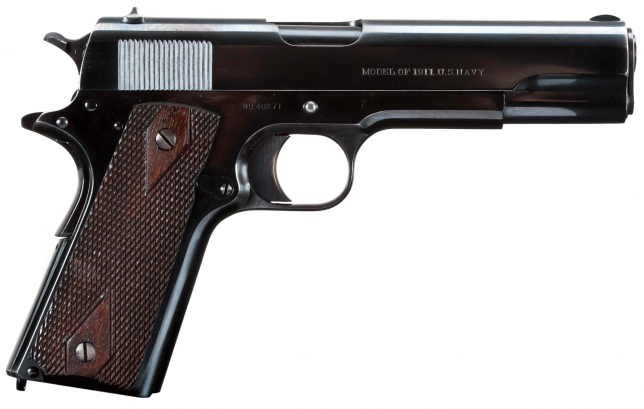 Designed by John Browning in the 1890s, the M1911 was introduced as a semi-automatic pistol that was a suitable replacement for the revolvers of the time.

During WWII, approximately 1.9 million M1911s were purchased by the US Government to arm all military forces. Colt was responsible for fulfilling an order of 400,000 of these while other manufacturers like Remington Rand produced as many as 900,000.

Nevertheless, Colt is the name that stands out in people’s minds when they think of the M1911 which is why it is hardly shocking to find Colt among the names on a list of the best 1911s today.

The 1911 is number one with a bullet because they were so popular as a small arm during the war. It also finds itself at number one because so many were produced during this period that the government cancelled all of their postwar contracts for additional production, deciding it would be more cost-effective to rebuild existing pistols than to procure any more.

That’s a lot of guns. 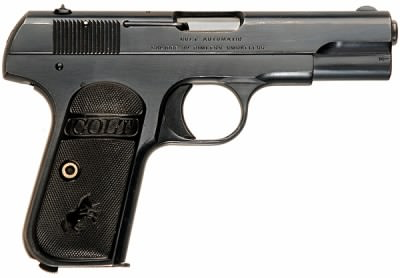 As we can see, the Colt name was solidified early on and it rose to the ranks of standard government issue in times of national turmoil or world conflict.

In the case of the M1903 Pocket Hammerless, they created a compact firearm that could be easily tucked away in the pocket of a soldier’s flak jacket, making it easier to conceal and carry around during long sojourns.

This .32 ACP self-loading pistol were issued to US Army and US Air Force general officers alike during the war and remained in military circulation all the way into the 1970s.

Although many people would go on to find favor with 9mm ammo for combat and self-defense purposes, at the time the .32 ACP was in no short supply and it definitely cut the mustard. 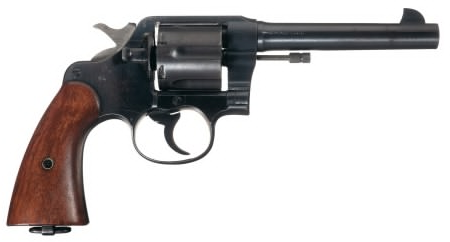 This six-shot .45 caliber revolver was first adopted by the Army in 1917 as a substitute for the traditional M1911. It was initially put to use during the World War I, but it had enough staying power to serve our countrymen well at the height of Herr Hitler’s reign of terror.

The half-moon clips utilized to extract the rimless .45 cartridges proved to be extra convenient for reloading and went well-appreciated among US soldiers.

The 1917 is still in use to this day with some avid gun enthusiasts posting videos of their antique revolvers. .45 caliber ammo continues to be in vogue as well with many great brands on the market for both combat and target shooting. 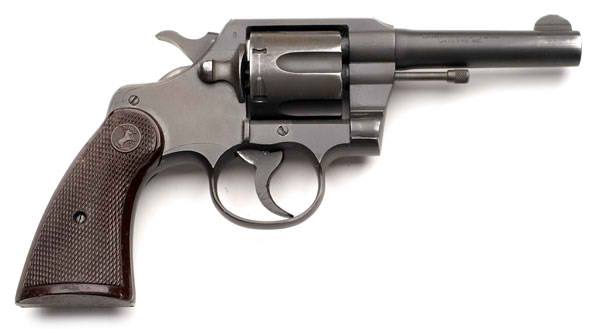 A double-action revolver, the Colt Official Police is a medium frame, six-round cylinder weapon that was typically chambered for the .38 Special. Although it was geared toward law enforcement agencies, it was swiftly adopted by the US military and its allies.

Primarily utilized to arm security personnel who were charged with guarding and protecting our buildings, defense plant installations and shipyards against sabotage or theft.

It is a testament to the customer satisfaction commitment of Colt that they took measures to simplify the Colt Official Police when the government objected to production delays.

Other military personnel who made us of the Colt Official Police or “Commando” included agency officials involved in espionage or the gathering of military intelligence.

The US Navy also got in on the action with 1,800 Commandos in addition to the 12,800 allotted to other military figures.

So popular was the Commando that commercial production resumed immediately after the Allied victory. In fact, it wasn’t until 1969 that the company announced the discontinuation of the M1927 model.

Still, there are many Commandos in circulation currently as many gun forum members can confirm. Like all Colt handguns, it is a formidable weapon that retains its legendary status. 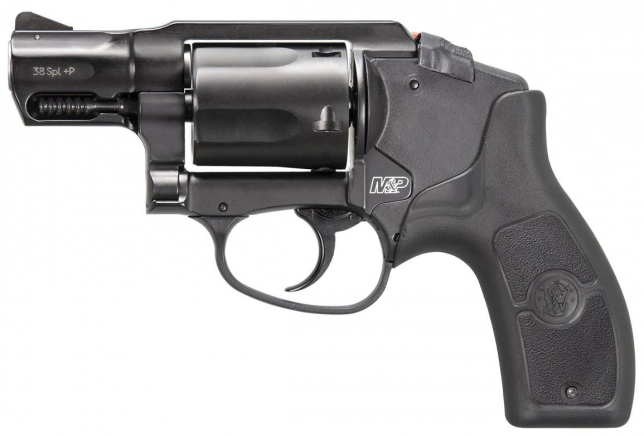 The M & P stand for Military & Police if you didn’t already know. A successor to the Smith & Wesson .32 Hand Ejector, it was the first Smith & Wesson revolver with a cylinder release latch on the side of its frame.

A six-shot double-action revolver, the M & P or “Victory Model” had fixed sights and a 2.5 inch barrel that made it compact and precise.

Modifications were made over time and, in 1904, the company offered the .38 M & P with a rounded or square butt with customer or client choice of a 4, 5 or 6.5 inch barrel.

Although this is the last small arm on our list, it was hardly scarce. On the contrary, it is second only to the 1911 in terms of sheer volume. More than 570,000 M & Ps were pressed into action during WWII, supplying the US, the UK, Canada, Australia, New Zealand and South Africa.

While there were many powerful weapons deployed during the war, not least of which were our anti-tank rocket launchers, mortars and grenade launchers, it was these small arms that kept our ground troops and security details from harm as they crossed enemy lines and prepared to come face to face with the krauts.