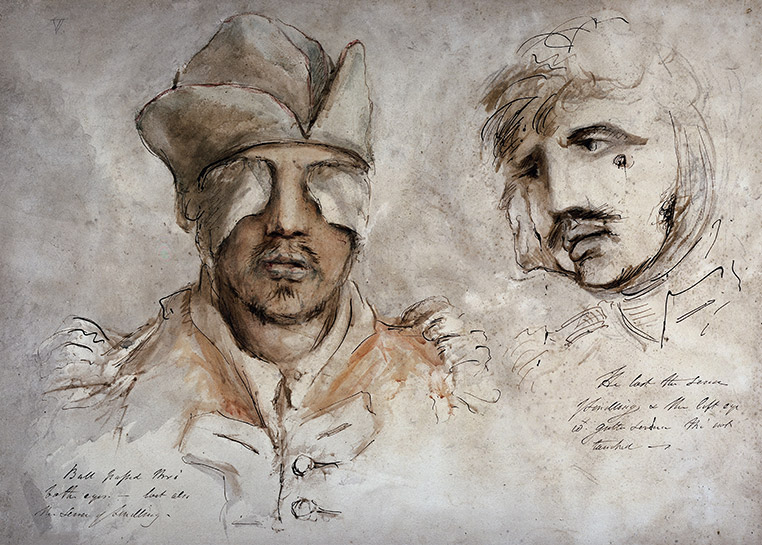 The Napoleonic Wars waged for twelve years with many weapons and tactics employed in the fight. This is especially true of the epic Battle of Waterloo on June 18th of 1815, a battle which finally brought the tyrannical rule of Emperor Napoleon Bonaparte to an end.

Of the weapons used in the fight, perhaps the most prevalent was the musket. The muzzle-loaded, smoothbore musket was the standard equipment for heavy cavalry.

Most every infantryman carried one of these muskets which fired iron balls that were three quarters of an inch in diameter. The common model of the time was the Charleville 1777 which was implemented in light infantry, cavalry and artillery.

So popular was the 1777 that it remained in service until 1826 when successive variants replaced it. By that time, 7 million of them had been produced.

Waterloo also occurred at a time when flintlock blackpowder weapons were all the rage. These included the Model 1805 Baker Rifle and the India Pattern Musket, both of which were pressed into action during the battle.

But it’s the Brown Bess that is said to have been instrumental in building the British Empire. This flintlock musket was regarded as a massive advancement in technology, one that was influential in shaping what future long guns would look like.

With ammunition re-supply posing a serious problem during the War, the establishment of the Brown Bess as a standardized model meant that all arms manufacturers would turn out weapons that were compatible with the same ammo.

Although the musket’s value in the Battle at Waterloo is undeniable, the weapon did have its drawbacks. Aside from muskets jamming or backfiring, the real problem was the damaging effects that musket fire and muzzle flash could have on a soldier’s eyes.

In an 1860s medical text, there is much discussion about the burns sustained from the musket’s gun powder. During one incident, Continental Army Major Simeon Thayer suffered from ocular hemorrhage.

Among Sir Charles Bell’s beautifully rendered portraits of the injured soldiers he treated at Waterloo, there are two examples of the eye wounds that afflicted the average infantryman. One shows a soldier with bandages over both of his eyes while the other illustrates the flash burns beneath the eye.

Still another shows a man with half of his head shaved clean to treat head trauma, but the viewer can clearly see that shrapnel had scored his cheek, further backing up the claim that muskets were dangerous weapons indeed.

So intense was the muzzle flash of the musket that anecdotal photographic evidence shows soldiers shutting their eyes when firing to avoid the aforementioned injuries. Those who have witnessed the use of modern musket reconstructions have reported that musket owners advise shooters to face away when firing one.

This isn’t surprising since flash burns to both the eyes and eyelids have been observed. But it’s hardly comforting when you think about a shooter’s primary objective—hit the target.

If fixed sights, of the type common to contemporary small arms had been available at the time, maybe the issue of their looking away wouldn’t have compromised marksmanship, but, alas, telescopic rifle sights were not introduced until some time between 1835 and 1840. The first written account of a telescopic sight was in an 1844 text entitled The Improved American Rifle which claims that the first sights were made by Morgan James of Utica, NY.

Forensic pathologists have noted the injuries that can occur when firing a weapon. Obviously, it isn’t just the musket that can do damage to the person handling it. All firearms are dangerous if the person firing one is unaware of proper safety precautions.

Proper eye protection is vital during any live shooting activity. This is true today just as it was true during the Battle at Waterloo. Ear protection is also of paramount importance and should have been required at Waterloo. Had it been, perhaps Alexander the Great wouldn’t have suffered such psychological turmoil from the exploding gunpowder used at the time.

I always say, shooting glasses are second only to ear plugs in my opinion when it comes to firearm safety. In fact, I always tell my friends to stay home if they don’t intend on bringing the appropriate essentials to the firing range.

Why? Because I don’t want to have to pack it in early if they catch a ricochet in the face or start whining about a punctured ear drum. One can only imagine the lamenting that must have gone on between soldiers at Waterloo and similar battles in the 1800s.

Today, we have all of the protection we need at our disposal. There’s everything from electronic noise-canceling earmuffs, rubber plugs, flare-resistant shooting glasses and advanced optics for optimal precision.

I look at my ballistic-resistant Oakley Radar Range Shooting Glasses with TR22 Prizm lenses and my Howard Leight R-01526 Impact Sport Electronic Earmuffs with built-in multi-directional microphone and I marvel at just how far we’ve come.

In the case of the latter, they are sold in sets which means that soldiers could use them to communicate with each other during a tactical operation without running the risk of hearing loss. And in the case of the former, those Prizm lenses are able to be fine-tuned to suit your lighting environment which would mean that soldiers could adjust them to suit nighttime missions.

If the men who fought the good fight at Waterloo had been able to get their hands on modern safety gear, there’s a strong likelihood that Sir Charles Bell’s canvases would have remained blank. Some of them would have, I’m sure.

For example, US military forces have been using 3M Peltor Comtac III since the early-Aughts and The Military Combat Eye Protection Program (MCEEP) was even established to authorize soldiers to use protective eyewear via a Rapid Fielding Initiative.

The Army Public Health Center even cautions military personnel on the importance of protecting their eyes when serving in active duty, citing the astronomical cost of vision loss in the United States.

War is hell as the expression goes and casualties are inevitable. But hearing loss and eye injury are at least somewhat avoidable.