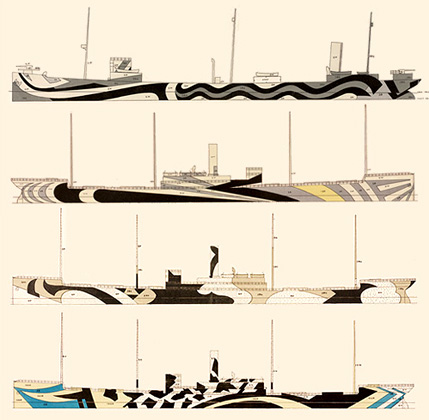 A Mrs. Nora Holloway from the Military Gear Blog (Opennes Note:Â  The blog links to an an online store so it could be subtle spam)sent me an email a few days asking me to share an article she wrote concerning the history and possible future use of Dazzle Camoflage on military ships and vehicles.   She posits that perhaps there may be a resurgence in the use of dazzle camo based on recent research showing it is marginally effective in low-tech environments.   Dazzle Camo was used extensivley on ships in WWII but for some reason I highly doubt that it will make a comeback.

Painting and repainting military vehicles is expensive and time consuming.   First off, the military does not use normal paint, it uses special paints that absorb chemical agents called Chemical Agent Reactive Coating (CARC) that is 1 expensive, and 2, requires special equipment when painting with it.   My platoon had to repaint our Bradleys in the mid-90’s and to get it done we had to wear chemical gear and use special respirators because CARC paint is extremely toxic until it cures.   Secondly, I don’t know that a paint scheme that would perhaps cause an RPG to miss by 3.3 feet IF the vehicle were traveling at 55MPH provides enpough justification to repaint the military’s entire fleet of vehicles.

I think research would have to show some great advantage of dazzle over current paint schemes to justify the expense of repainting.   It is more likely that the funds required to repaint vehicles could be used more profitably to reset and repair vehicles used in previous deployments and make them available for futrue use.   What do you think?

I would like thank Mrs. Holloway for pointing me to the article though, it is intriguing to say the least.