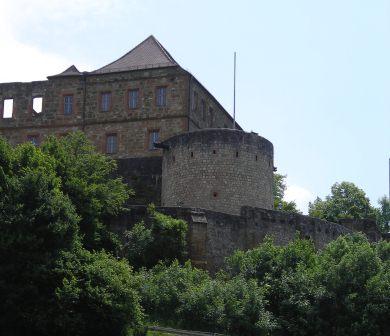 The Geichberg is a castle located about 10km west of Bamberg Germany in Unter Franken or Lower Franconia in English.   The castle was completed no later than 1125 as that is the first time it was recorded in documents.   It has been destroyed and rebuilt several times in in its history.   The current incarnation originally dates from 1390 but was extensively renovate in the early 17th century. According to the history piece at the castle itself, it is the only fortress in the Bamberg area that did not fall during the Thirty Years War.   The castle had a renaissance style villa or Schloss built in it at some time in the 17th century but in 1802 it was decided toÂ  remove the roof so it would look more like a ruin and thus more romantic.   In 1971 the city of Bamberg bought the castle and restored it and then opened it to the public.   Today there is a restaurant on the premises that serves traditional Franconian food, it is pretty good too.   Unfortunately the interior of the buildings except for the restaurant are not publicly accessible.   I would have especially loved a chance to get into and look around the interior of the keep.

In layout it is a classic Norman keep and bailey fortress.   There is a square enclosing curtain wall and within it a classic Norman keep or Donjon that looks to be about 4 stories tall.   I could not get into the keep as it was locked but looking through the embrasures, the wall is about 2m thick.   The castle itself is built on a rocky promontory and the curtain walls are actually fairly low, most of what looks like wall is actually just stone facing to the dirt and stone of the hills itself.   The four corners of the outer walls are guarded by what I would call semi-towers.   They look like towers from the outside but are actually built into the native stone and only present as towers.   The bailey is square and about 50m on its short dimension and 100-125m on its long dimension and oriented generally to the points of the compass.

The position of the castle is relatively strong, it is situated on a hilltop with an excellent view of all avenues of approach.   The biggest weak point is the bailey itself, if an attacker breached the wall then the defenders would have no choice but to retreat to the keep because there is no inner bailey.

Pictures follow.   [There are two different coats of arms throughout the castle, the only one I could positively identify was that of the city of Bamberg.   If anyone can ID the others please leave a comment.]