Here is an interesting episode that occurred in March, 1351 during the Hundred Years War.   It occurred during the Hundred Years War but was only really a peripheral part of it.   The combat occurred between the French garrison of Josselin Castle and the English garrison of PloÃ«rmel Castle Brittany, part of modern day France. It was instigated because the English were not abiding by the terms a truce that had been made locally. 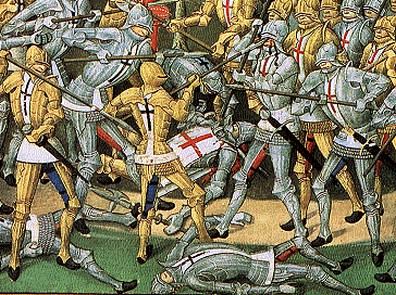 The challenge to combat was issued by the French commander Jean de Beaumanoir to Robert Bramborough. On 26 or 27 March, 1351 the challengers met each other midway between the two castles with 29 retainers giving each a force of thirty men to decide the issue.   Before the battle commenced the two parties met and exchanged greetings and pleasantries before backing away from each other to make final preparations.

At a prearranged signal the two parties rushed to attack each other and the battle commenced.   Any weapons was allowed as well as being mounted and using lances.   The battle lasted for approximately nine hours before the English were beaten.   Nine Englishmen and four Frenchmen were killed in the fighting and all of the English were taken prisoner and later release after the payment of a ransom.   Additionally, almost every participant was wounded in some way.

The episode had no perceptible effect on the course of the War but became famous as an example of the purest form of Chivalry.   It was celebrated in a poem by Froissart that became famous and the surviving combatants became famous and were honored for the rest of their lives.   Their is a famous anecdote about Froissart meeting a participant at a party hosted by Charles V in which the veteran was seated at the head table and honored for his participation in the Combat.

Below are some links to both the poem by Froissart and a text account as well:

This is video of a reenactment of the Combat of the Thirty at one of the modern Rennfests.

Below is a list of the comabatants in the Combat of the Thirty.

â€  indicates that the combatant was killed. Nine Englishmen were killed in total and the remainder captured. At least three Frenchmen were killed and a number of them were captured during the fighting, but were released after the final French victory.