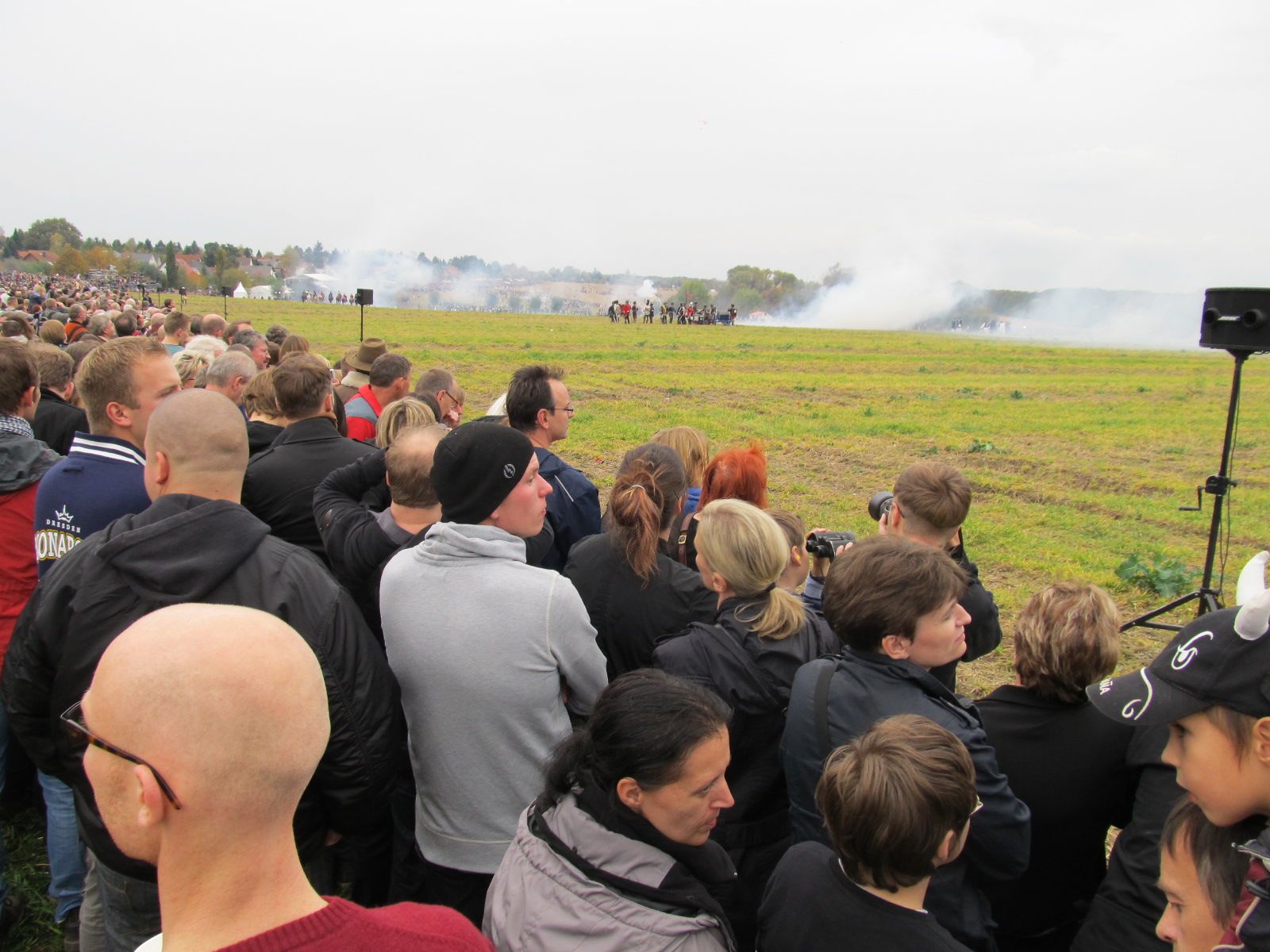 The Battle of the Nations in and around Leipzig, Germany from 16-20 October, 1813, was the culminating battle of 1813 and the last major battle fought prior to the fighting in France in 1814 before Napoleon’s defeat, abdication, and exile to Elba.  It was the largest battle fought in Europe to that time with over 500,000 soldiers on both sides.  The city of Leipzig spent millions renovating the huge memorial to the battle and planned a week of commemorations coinciding with the 200th Anniversary of the battle.

This past weekend I went to the 200th Anniversary of the Battle of the Nations re-enactment.  This was billed as the highlight of the week-long commemoration of the battle with over 5,000 re-enactors from almost 30 countries taking part in reenacting a portion of the battle on a part of the actual battlefield.  It might have been awesome, I don’t know because while I was there I did not manage to see more than clouds of smoke until it was almost over because of the masses of people standing in front of me.

I have been to several Civil  War reenactments in the States to include Fredericksburg and Antietam as well and many smaller battles like Pea Ridge in Arkansas.  I have never seen one that was so poorly organized or so expensive for people wanting to see living history.

There was supposedly only planning done for 20,000 – 25,000 in the audience, but according to the radio 35,000 were in attendance and judging by the lack of space inside the venue and lack of vendors I would guess more people showed up than that. Here is a list of things that made a potentially great event a horrible experience.

1. My wife & I paid €15 ($20) per person to stand around and see nothing, and I mean nothing for almost the entire show.
2. The event was supposed o start letting people in at 1000 with the re-enactment beginning at 1230.  It eventually started almost 2 hours late at 1410 and the reason for this according to the announcer is that they were still selling tickets and wanted everybody to be able to get inside.
3. There were not enough food vendors, my wife waited in line for almost an hour to get some food.
4. The standing area was so crowded it was literally impossible to move and when we decided to leave there was no way to go past the VIP area because the walkway narrowed so much that it was blocked.

5. The announcer kept trying to reassure us that everything was awesome and I am sure it was from where he was sitting.
6. Lastly, My wife paid €1 ($1.50) for the toilets -porta potties, only to find out that the hand-washing station did not work and she would have to stand in line on the men’s side again in order to wash her hands.
7. Parking was essentially non-existent.  We ended up parking a little over 2km away and walking

We got up at 0600 and drove for three hours one-way to be not only disappointed, but angered.  They had at least a year to set this up and then turned what could have been an awesome event of living history into a great advertisement to avoid Leipzig.

I have never been to an event with such high expectations to have them be dashed so violently upon arrival.  Words can convey but not adequately express how disappointed I was at the unprofessional manner in which this event was put together and executed. At least the weather was nice, in the upper 60’s with no rain.  Suffice it say that if the Germans had fought at Leipzig the way they put this together they would have been soundly defeated and deservedly so.