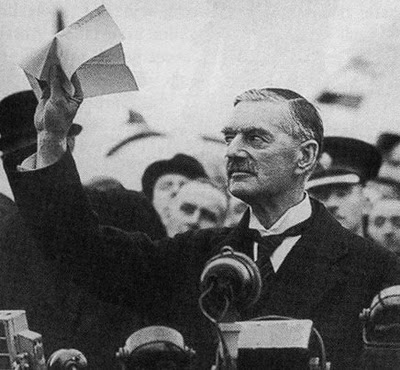 Obama: Nuclear deal blocks Iran’s path to bomb In an ironic twist showing that the 60+ years since World War II have only fostered institutional amnesia the US and five other powers buckled and agreed to appease Iran in talks about its nuclear program.  Agreeing that sanctions will be eased in return for Iran behaving US Secretary of State John Kerry channeled former British Prime minister Neville Chamberlain by paraphrasing him and tweeting:

I just wonder if he is going to wave a piece of paper around when he gets home too? 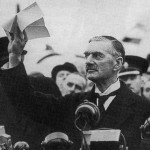 Has the world really forgotten that appeasing tyrannical regimes is a recipe for getting heartbroken and sore?  Why would any sane, rational person think for a minute that Iran would give up the nuclear program they have defended so fiercely over the past decade+ in return for access to less than $10 billion dollars of oil revenue?  My guess is that Iran already has enough fissile material for at least one but probably more bombs and thus it suits them to play nice right now in return for concessions.  Remember, Hitler agreed to only take the Sudetenland in September of 1938, because he was not quite ready for war.  But then he turned around and occupied the rest of Czechoslovakia in spring 1939 and kicked off World War II less than a year later.

Should I be worried about being recalled to active duty to go fight in the next world war?

13 thoughts on “US Secretary of State Announces “Peace in our Time.””