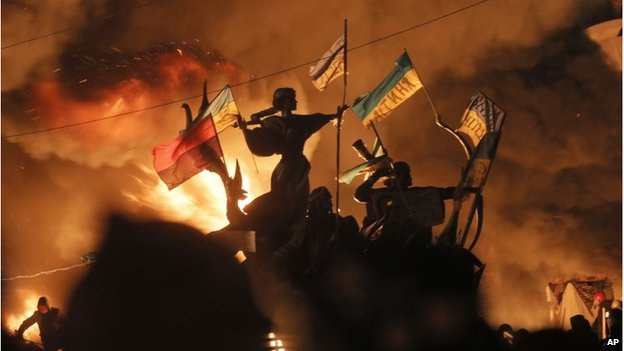 Ukraine crisis: Police storm main Kiev ‘Maidan’ protest camp:  The question on everyone’s mind: Is this the start of the Ukrainian Civil War?  I would guess no but still put the likelihood of Ukraine descending into civil war around 50%.  It would appear that the president is hoping he can wait the protesters out.  A hope that appears misplaced since the coldest part of the winter is about over and warmer weather is on the horizon.  The return of warm weather will actually bring out more protesters and if eh fails to dislodge the protesters now he appears weak, which will just make more people willing to protest the pro-Russia policies.  Ukraine bears watching.  There has not been a truly violent civil war in Europe since 1796 and we might be watching the first clashes of the next.  If civil war happens it will be interesting to see how the rest of the world aligns.

What Happens Next in Venezuela Will Depend on the Military (Opinion):  This story is also worth watching and if anything the potential for civil war is higher in Venezuela than Ukraine because the people have had a longer time to get truly fed up with the incompetent regime and it’s blatant corruption.

Egyptian militants warn tourists to leave or face attack:  Lest we forget, Egypt has not settled down so much as had a lid clamped on it by the Egyptian Army.  I fully expect to see some spectacular attacks in Cairo this year by the Sinai insurgents.

Fears grow that Ukraine’s military could be called into the fray:  I would guess that any attempt to use the troops for domestic policing would definitely provoke a civil war.  The interesting question to me is what would be the EU response if the situation in Ukraine devolves into civil war?  I have suspicions on what it would be but they could surprise me.

Ukraine sets European course after ouster of Yanukovich:  It would appear that a peaceful settlement of the sectional differences in Ukraine is in the offing.  I am not convinced that the issue is settled yet though.  Russia has put a lot of prestige on the table and is quite capable of fomenting trouble with a Ukrainean turn towards Europe.  The country is also split fairly evenly aver the relative advantages of EU integration.  This is not over yet but the signs for an end to the bloodshed and an avoidance of full-fledged civil war are promising.

Pentagon Plans to Shrink Army to Pre-World War II Level:  Who among us did not see the military being drastically cut as the Terror Wars wind down?  Cutting the military fits the pattern and we will once again be aught flat-footed if the country goes to war.  However, we should all take note that while there is plenty of talk about cutting the military budget there is absolutely ZERO discussion about reining in entitlement spending such as welfare and medicaid.  That lets you know where the Admin’s priorities are.  The mob clamors for bread and circuses and the Emperor cuts the Legions to pay for more bread from Egypt.

Government Buildings Seized in Ukraine’s Crimea: The political problems in the Ukraine are not over by a long shot.  The talking heads started patting themselves on the back thinking this thing was over, it is not.  The two sides in the country are split, the main sides are themselves unsure of where to go and the danger is that the radicals on both sides will lead everyone else along as the radicals escalate the violence.  Russia is also a wild card, Russian prestige is at stake in the Ukraine as it has not been for 100 years.

Russian moves raise stakes in Ukraine conflict:  It just keeps on getting better.  Does Russia want a civil war?  The West is going to threaten Moscow with the loss of their lunch money if Putin doesn’t back down and disengage.  Now why would Russia back down?  Western Europe needs Russian gas more than Russia needs Western money.

Crimea votes to join Russia, Obama orders sanctions:  Heck at this rate, I might not even make it to the 15th before war breaks out in the Ukraine.  The West is playing a continual game of catch-up and letting the pro-Russian faction in Ukraine and Putin himself set the agenda.  That is a losing strategy.  The West needs to force Putin to react to them for a change and I don’t think visa restrictions and asset freezing is going to do it.  From where he is sitting right now, Putin can see no credible threat to stop him from annexing both the Crimea and the other ethnically Russian parts of Ukraine.  I just wonder when he is going to start calling that section of the Ukraine the Sudetenland.

Cyber Snake plagues Ukraine networks:  Is his the next stage in Russia’s attempts to separate the Crimea by hampering any military/civilian response on the part of the Ukraine?

Interpol probes more suspect passports from missing flight:  Now this is interesting.  I had no inkling that there would be something fishy other than run of the mill maintenance problems from a third world airline when i read about this plane going down.  The apparent crowd of passengers with bogus or stolen passports is an interesting development and makes me wonder what did cause this plane to go down.  I would expect that if it were terrorism some group would have claimed responsibility by now.  The outcome of the investigation and search for this aircraft bears watching.

Putin mocks the West and threatens to turn off gas supplies:  In another development, I wondered how long it would take Putin to get around to threatening to cut off the energy spigot in a bid to deter Western responses to the Russian aggression against Ukraine.  that question is now answered.  I bet he wished for better timing and a worse winter for Western Europe though.  There is now a good 8 month period until next winter when that threat rings somewhat hollow and allows the West to seek alternate energy supplies.  I would not be surprised to see the UK and Norway frantically trying to up production in the North Sea this summer.

Russian troops seize hospital, missile base in Ukraine’s Crimea:  When is the West and Ukraine going to call the Russian acts in Crimea what they are, Acts of War?  If Russian activities so far don;t amount to aggression what will it take?