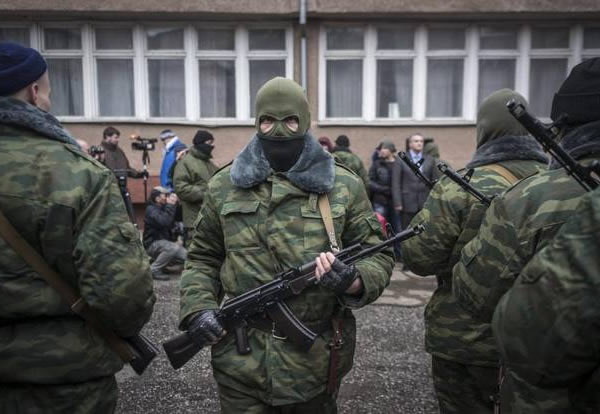 Crimea referendum: Voters ‘back Russia union’:  Yep, That had to be a fair election.  It’s not like the Russians don’t have armed troops all over the place there.  I stand by my prediction that the US and EU will meekly submit to whatever Russia wants and go no farther than sanctions despite the Western Guarantee of Ukrainian sovereignty from the 90’s.  Ukraine will probably continue to dominate the news this month as well.

NATO general warns of further Russian aggression:  So, what led NATO’s commander to just now acknowledge the danger that the Crimea will not be enough for Putin?  I would be very curious to see one of his daily intel updates.

Turkish PM defiant after Syrian plane shot down:  We should not forget that the Syrian civil war has not ended.  It is not in the news but the fighting continues and as far as i can tell the government forces are winning.

NATO’s Military Decline:  This is an opinion piece but it brings up a very valid point about some of the main reasons behind the tepid Western response to Russian actions in the Crimea.  The West is largely incapable of mounting an effective military response to Russian aggression if one were required.  Shades of 1938 anyone?

Russian military holds exercises in breakaway Moldova region: Personally, I don’t think Russia will go after Trans-Dnistria next.  I see Russia agitating for the amalgamation of the majority ethnic Russia eastern Ukraine and then seeking Anschluss with Belorussian before they look farther afield.  I also assume the endgame is a reconstitution of Greater Russia along the lines of the pre-Bolshevik borders.

Armed pro-govt militias roil Venezuela protests:  How long until the demonstrators in Venezuela resort to shooting back?  Venezuela is just as volatile, if not more so, than Ukraine was in November when the demonstrations started.  Civil war could start here too as the people begin to feel they have no other choice to better there lot.

Russian Buildup Stokes Worries & Fighting Words: Schäuble Says Putin’s Crimea Plans Reminiscent of Hitler:  I think the Russian buildup along the border with Ukraine is ominous to say the least.  I also find it ironic that the only political figure in the West willing to call a duck a duck and point out the historical parallels in recent events is the German Finance Minister.  It is also amazing the speed with which other German politicians are running away from his remarks.  I almost expect to see a Roadrunner like rooster tail of dust behind Merkel.

Korea’s Trade Fire; Island Residents in Shelters:  Just when we needed more tension in the world, North Korea starts getting froggy again.  I guess Kim Jong Un is feeling neglected because he has not been in the news lately.

Putin Defies Obama in Syria as Arms Fuel Assad Resurgence:  I just wonder why the writer of this news story thinks Putin should listen to Obama in the first place.  Does anybody on the world stage listen to Obama?  Certainly not North Korea, Iran, Assad, or the Muslim Brotherhood.  At best Obama is treated with fake respect and then ignored.  Russia has interests in keeping Assad in power if for nothing else then to ensure they keep their naval base.

Russia cannot afford ‘collapsing state’ in its backyard: In a display of unparalleled cluelessness the German FM announces what is obviously untrue.  Russia has no problem with a collapsing state in their backyard because Russia is busy encouraging the collapse.  It is the states of the EU that cannot afford Ukraine to collapse and the loss of the strategic buffer that state represents.  European statesmen seem to not realize that Russia is an enemy, or at least is choosing to act as one and really, what is the difference?

Japan to intercept any North Korea missile deemed a threat:  Let us not forget that all is not calm in Asia either.  The North Koreans are still pursuing their own agenda that is at odds with the interests of every nation in the region except China.

Pro-Russians seize eastern Ukraine government buildings:  Stage two of the russian dismantling of Ukraine begins.  I would guess that if Putin can keep his agitators busy he will let the unrest in eastern ukraine simmer until early June sometime after the snap elections. That is of course,  unless he wants to use the agitation as a pretext for military action.  I would guess that is not the case though and the next major Russian move will not come until autumn when he can use Russian control of western European energy supplies as a lever to discourage western intervention.

U.S. accuses Russian agents of stirring eastern Ukraine unrest:  I wonder if Putin is losing control of the agitators in Ukraine.  It would appear that now is a poor time to increase the agitation given that outside nuclear weapons Russia’s biggest strategic threat is cutting off the flow of natural gas to western europe and that is a card that has much less sting at this time of year.  I would guess that Putin just wanted to keep the pot at a low boil until the early fall and the ethnic Russians in Ukraine are forcing his hand.  It just gets more interesting all the time.

Kiev gives pro-Russian protesters 48 hours to end their occupation:  The plot thickens.  I am still convinced that events are moving out of Purin’s control as current events in Eastern Ukraine are sure to alarm the West when alarming the Western powers if the last thing Putin wants right now.  I expect Putin to stand by as Kiev puts down te protest for now but to use the quelling of incipient rebellion later on as rhetorical ammunition to argue in favor of Russian annexation of Eastern Ukraine.  A Sudeten Strategy if you will.

Kiev Government to Deploy Troops in Ukraine’s East & ‘Russia is waging war against Ukraine’:  It would appear that Ukraine is stealing a march on the separatists and Russia and attempting to seize the initiative as they should have done a month ago.  The question now is a two-parter; will the West support Ukraine to the hilt and will Russia escalate.  If the West supports Ukraine’s efforts to quash the separatists and affirms the sovereignty of Ukraine with concrete measures Russia has no choice but to de-escalate.  If however, the West does not support Ukraine then Russia has nothing to lose by tossing around threats and escalating the war of words and perhaps adding in undeniable military measures inside the territory of a sovereign neighboring state.  I think we are entering a new phase of the Black Sea Crisis.