In the news: Ryan Defends Reduction to Cost-of-Living Adjustments for Early Military Retirees

In a stunning display of which segment of society politicians are really afraid of last week politicians in Washington agreed to cut military retired pay in an effort to offset the sequester cuts that they put in place just two years ago.  Unsurprisingly there has been absolutely zero talk about attempting to curb growth in other entitlement spending such as SNAP and TANF (welfare)being the two largest programs.  The logic behind it is clear.  There are more people receiving welfare than military retirees thus making welfare recipients a more powerful voting bloc. 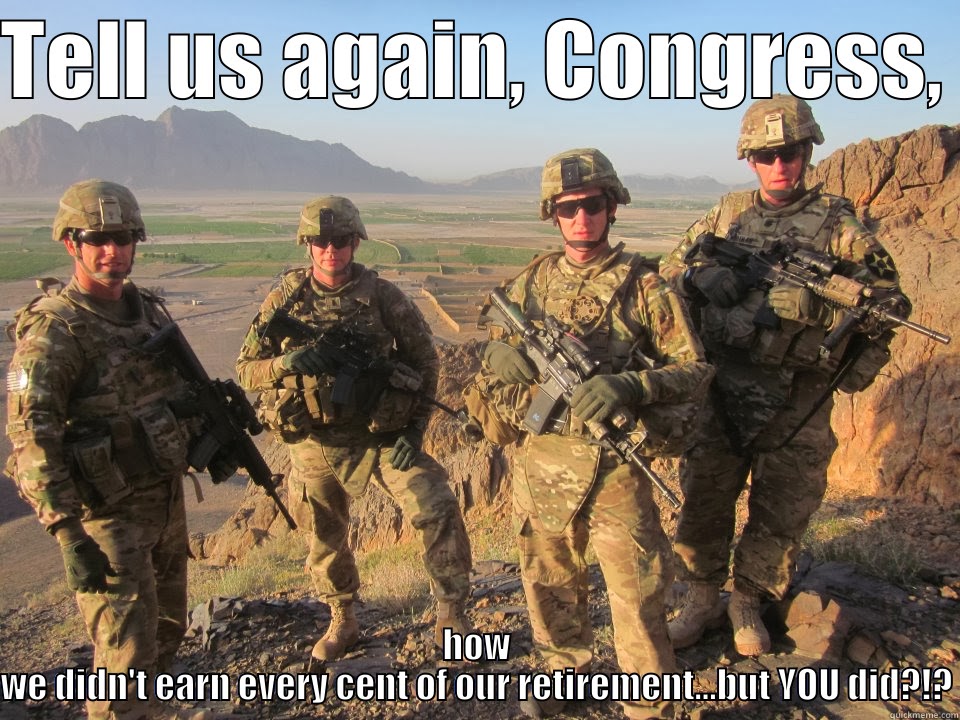 What is the difference between the two groups?  Easy, military retirees dedicated a significant portion of their lives to serving the nation, welfare recipients did not.

Total honesty, I myself am a military retiree and feel betrayed by both my country and my elected representative.  My Congressman (John Carter, TX-32) voted yes.  I made a deal with the nation, I would serve and go where they wanted me to and fight who they told me to fight, in return I would receive a set amount of benefits after twenty years service.  I did so for 23 years and went to two wars.  Now I find out that my country is not going to keep up their end of the bargain.

For some reason I am not surprised at this, just disgusted.

More Research Needed On Veterans Health Issues By: Doug Karr, USN Veteran Operations Desert Storm & Desert Shield The U.S. Census Bureau estimates that there are nearly 25 million veterans currently living in the United States. Nearly $60 billion is spent on federal programs for veterans, according to the U.S. Bureau of Economic Analysis. This is in addition to funding from individual states. Despite such efforts, there are still many health issues facing veterans today. A recent report released by the Senate Veteransâ€™ Affairs Committee shows that many veterans are facing disability and mental health issues. The report states an urgent need for services to deal with such conditions as … More after the Jump…