The latest month’s wackiness in the world of international relations, politics, and brinkmanship.

Syria Begins to Break Apart Under Pressure From War: This article states the obvious. I wonder when, if ever, the NYT is going to regain its former luster as a serious paper. 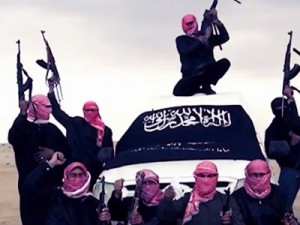 As the analysis in this piece could be done by any 2-year old with an internet connection It is obvious that Syria is falling apart and has been for the past 2 years. The war there would probably be over were it not for foreign meddling in what is arguably an internal conflict. Apparently Western bleeding hearts have more finely developed skills of self-delusion than I originally thought as they seem incapable of admitting that the opposition is rapidly becoming co-opted by Jihadist extremists I am also dismayed that we don’t see more pieces abut how foreign interference has prolonged both the fighting and the suffering in Syria.

Rand Paul: My colleagues just voted to arm the allies of al Qaeda: The story here is not that Rand Paul is opposed to arming Syrian rebels it is that such an insane proposition got enough votes to get it out of committee in the first place. I have wracked my brain for weeks and still cannot come up with a sound strategic reason for the US to get further embroiled in the muddy, murky problems of a region full of people that hate the US in particular, and the West in general. It would appear the Arabs are busy killing each other off and we should let them be about it.

Israel general sees increased risk of surprise war: There is no question that with the Civil War in Syria and other upheavals across the region the risk of Israel being attacked is greater. Nothing would unify Arabs more than an attack on the universally hated Jews of Israel. I would argue that Israel is correct to be wary and it would imprudent for them not to be.

Riots grip Stockholm suburbs after police shooting: What is difficult to discover about these riots is that they originate from one of the Muslim enclaves in Stockholm. 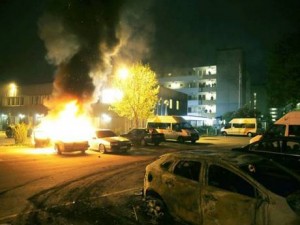 The linguistic contortions engaged in by the press to avoid mentioning that are amazing. At some point, we in the West are going to have no choice but to admit that Islam is incompatible with Western values and it’s adherents are unable or unwilling to assimilate. One of the biggest questions to me is how many bodies are going to be stacked up before it happens and whether it will then be too late to rescue our society. What will it take for both Western leadership and societies to admit what is so obvious for thinking people to see? Is the modern liberal thought really a suicide pact among so-called Western intellectuals?

A Twofer – New Computer Attacks Traced to Iran, Officials Say and Confidential report lists U.S. weapons system designs compromised by Chinese cyberspies: These stories, especially the second, lead me to wonder what constitutes a digital “Act of War”? It seems unfathomable to me that the wholesale theft of sensitive weapons plans is not an act of war. At a minimum the US should be doing everything possible to shut down the Chinese internet or at least try our hardest to cut of the Chinese from access to US based servers. Perhaps it is time that offensive cyber-war on the part of the US was stepped up? I would argue that say hacking the Chinese power grid and turning off the lights across China in retaliation or even better, hacking their military network and planting false information would be in order. Something must be done and it is obviously past time for he US to stop playing shabby defense in cyberspace and play more offense thus forcing the other guy to devote more resources to defense.

Syria’s Assad “confident in victory” in Civil War: Well, I would not expect him to say anything else publicly even if the rebels were pounding on his bedroom door. This is actually kind of a stupid story because what should he say? “We are losing and prepared to throw in the towel if we are promised cushy exiles in France along the lines of Idi Amin.” I am also not sure what to make of the claims that the new missiles from Russia have already been received. The claims strike me as boasting and the lack of an Israeli response tends to suggest they are not there. I simply cannot see Israel not following through on a threat as such activity is counter to past Israeli actions. The Israelis do not promises they do not keep, especially where they see their security at stake.

Russia to send nuclear submarines to southern seas: I don’t even know what to make of this. I would guess that Russia’s return to nuclear sub patrolling is similar to the pre-WWI German Risk theory of naval operations. I just don’t see Russia’s blue water force being able to achieve anything other than being a residual threat that must be calculated into US/Western naval operations. US/Western naval dominance will not end any time soon.

Britons warned to steer clear of Turkey as 1,700 protesters arrested after riots rock the country for a third day: The main thing to note about this story is not that the Brits have issued a warning about travel to Turkey but that Turkey is apparently following the civil unrest of the Arab Spring at about two years remove. Are we seeing signs here that the average Turk is not a willing Islamist or Proto-Islamist? I tend to think we are and that Kemal Ataturk’s secular experiment is not as dead as I and many others had thought it was with the rise of Erdogan’s AKP. Only time will tell.

Istanbul’s Taksim Square quiet after chaotic, violent night:  11 days on and no end in sight. It seems apparent at this point that all the hard line attitude by Erdogan is achieving is to piss off the average Turk even more.  The question now becomes if he is willing to soften his tone or is he confident enough to face a possible electoral whipping in the upcoming elections and possibly losing power.  It is a good bet that the Turkish military will not fight a civil war to keep a neo-islamist in power as the AKP has not been in power long enough to purge the secularists from the military completely.

U.S.: Syria used chemical weapons, crossing “red line”:  The only thing I can say to this is STUPID! STUPID! STUPID!  By some accounts the rebels are also guilty of using chemical weapons and we know that a significant portion of the rebels are jihadist/Al Qaeda affiliates.  What possible stretch of the imagination could make it seem that arming groups such as these is a good idea?  If we arm the rebels we are very likely to see the weapons we give them turned on us at some point in the future.  I reiterate, thee are no viatl Western or US strategic interests at stake in Syria.  The best thing for the US and West to do is sit back and let the Syrians and Arabs settle this for themselves.  There is no need to go rushing in to “save” anybody.  R2P is not a justification for stupidity although some policy makers apparently think it is.